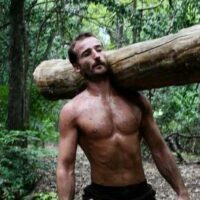 Born in the French countryside, Erwan Le Corre's youth was filled with outdoor activities. This was the gym where Erwan learned physical fitness through running, climbing, crawling, and jumping. At the age of fifteen Erwan began the study of karate, receiving his black belt at age eighteen. From there Erwan went on to explore a broad range of activities including Olympic weightlifting, rock climbing, triathlons, trail running, and Brazilian jiu jitsu.

After exploring all these sports, but finding all of them lacking due to specialization, Erwan started developing his own methodology. He researched ancient physical fitness practices and put together ideas for an approach that was about a broader understanding of human movement and health. Using this knowledge and his experiences he created a system for training and coaching he called MovNat.