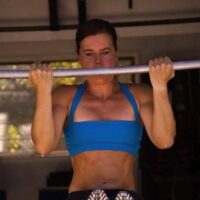 Eva T. is a two-time Olympian in Alpine Skiing (Albertville and Lillehammer ) and a twelve-year veteran of the U.S. Ski Team. She has won six National Championships, won a world Championship Bronze Medal, and is a World Technical Skiing Champion. She also is a Masters Weightlifting Champion. In 2011 she was inducted to the U.S. Ski and Snowboard Hall of Fame. She is now sharing her experiences from her athletic career and her knowledge in the Health and Fitness realm. As a sought after coach and consultant, she offers seminars, functional nutrition testing, and coaching to sustain training and optimize health. You can learn more at her website, Eva T. Strength and Conditioning.