3 Reasons to Lift Weights During Pregnancy

The recent controversy about weightlifting during pregnancy is nothing new, but it did make me think about why I personally benefited from prenatal strength training. 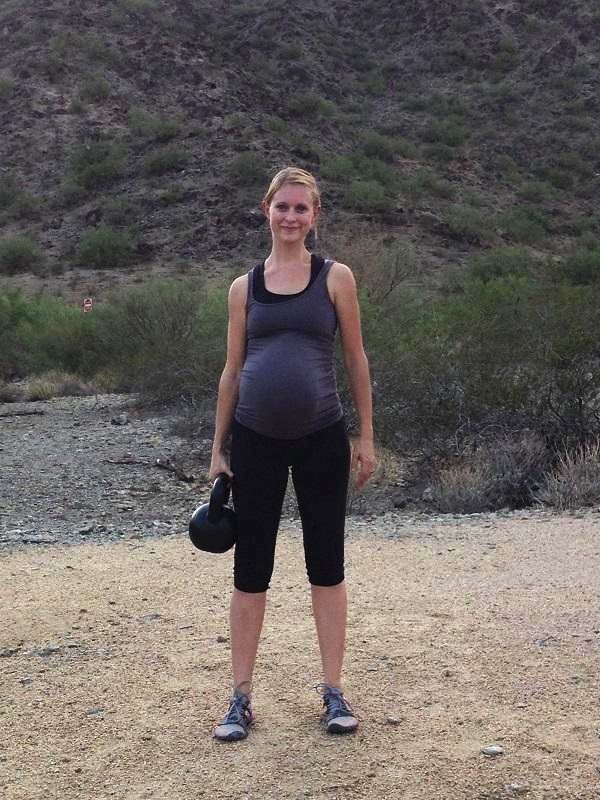 A recent photo posted on the CrossFit Facebook page generated a storm of debate about weightlifting during pregnancy. I was surprised at the negative response this woman received. A lot of the article responses to the controversy, including this one here on Breaking Muscle, aimed to explain why women shouldn’t lift heavy weights during pregnancy.

Personally, I cringe when I see people cringing at pregnant women doing CrossFit or any other kind of workout. I’ve been that woman out for a run at 28 weeks pregnant and getting stares from the neighbors. So I’m also biased, like any other person writing about a hot-topic issue.

Before I begin, let me say I don’t think in order to understand pregnancy and childbirth, you have to be a mom.

The best prenatal advice and support I’ve ever received has come from my husband, and I’m pretty sure he’s never had a bun in the oven. However, I do want to discuss my personal experience with weightlifting and pregnancy, because in the end, like many earth-shattering health decisions like whether or not I should eat eggs or do kegels, this is a personal matter, and there’s more to it than studies.

So here’s my own perspective. It struck me while reading some of the articles that surfaced after Lea Ann Ellison’s photo drama that while both sides of the debate are onto something, both sides are also wrong in many ways. Overall, there’s one big fact people seem to miss when it comes to pregnancy and pumping iron:

There is no one-size-fits-all prenatal fitness paradigm.

Some pregnant women stay fit by keeping up with CrossFit and weightlifting. Others find yoga and lower intensity exercise to be more beneficial.

And a lot of women around the world don’t engage in any workout routine at all because they’re too busy doing heavy manual labor required by daily life. Staying fit during pregnancy never looks the same for each woman.

You might even find you change your own paradigm as your pregnancy progresses.

That’s a good thing. If you start having a contraction mid-deadlift, take a break for goodness sake. Then again, if you wake up one morning after struggling with morning sickness for weeks and you finally feel ready to get back into gear, don’t stay in your bed because “experts” tell you you can’t lift weights while pregnant.

I guarantee if you’ve had a normal and healthy pregnancy up to that point and are used to lifting weights, you will not birth your baby on the gym floor. 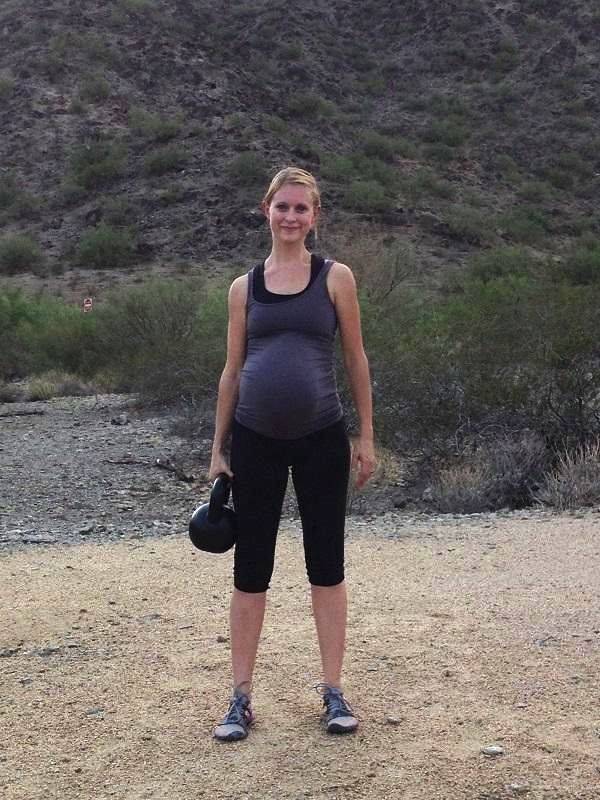 I just had my third baby three weeks ago, and it was my first time doing any serious weightlifting during a pregnancy.

I’ve been active throughout all my pregnancies, but during the last one there was a lot more strength training throughout, with the exception of the first trimester due to morning sickness.

During that time, I focused on my alignment in an effort to encourage my baby to assume a good position for birth and also practiced yoga. The second and third trimesters, however, were the most active of my three pregnancies.

I ran and hiked until the third trimester, did CrossFit WODs, kettlebell workouts (that’s me on the right at 34 weeks), and lifted heavier weights than I did during my previous pregnancies. I did scale my workouts quite a bit. I had also been doing all of these things before my pregnancy.

My little boy was born via unmedicated VBA2C (vaginal birth after two cesareans), and although he was three weeks early, he was almost six pounds and perfectly healthy.

I experienced no tearing during his delivery and active labor only lasted 1.5 hours. He’s also a pro at breastfeeding and has been since about five minutes after he was born. The recovery has been effortless compared to my previous c-sections. In short, it was pretty much the perfect birth experience.

Is this story an anecdotal and personal example? Yes. Pregnancy is a personal and anecdotal sort of thing, though. And because it is an anecdotal, personal story, can I say with absolute objective certainty that I had an easy pregnancy and delivery because I lifted weights throughout my pregnancy? Well, I didn’t have a scientist with lab materials to monitor my pregnancy and analyze it from an objective perspective.

But I can pretty confidently chalk the following three benefits up to my continued weightlifting habits:

Having a baby is hard work. While I agree that pregnancy is a time to slow down, go inward, and meditate, there is also a certain amount of mental toughness you need to have a baby, regardless of the way you deliver. During labor your body is going to do things you didn’t know it could do and feel stuff you didn’t know you could feel.

Your body is going to tell you it’s not fragile and it’s going to push this baby out whether you like it or not. If you have a c-section, your body needs to be strong and conditioned because let’s face it, the recovery sucks.

Keeping up with a strength training routine helped me build confidence in my body and its abilities.

If you spend your whole pregnancy thinking there’s something wrong with your body, you’re going to freak out when you start having hard contractions, just like if you go into a workout thinking it’s too hard, you’re going to struggle to get through it during the toughest parts.

While I completely agree that strength training done wrong may exacerbate low back pain and other common pregnancy aches and pains, in my experience lifting weights with good form on a regular basis helped prevent both back pain and sciatica.

I also experienced significant upper back pain after my first two pregnancies, but haven’t had the same issue with my third. While I think a lot of this is due to better alignment habits, yoga, and mobility work, I know that kettlebell swings, one-legged deadlifts, and goblet squats also had something to do with it.

Just make sure you scale the weight and focus on form. This is where having a personal trainer or coach can make a huge difference.

Not only will weightlifting help you maintain mental stamina and toughness for labor, but it will also maintain and improve physical stamina.

It takes a lot of strength to get up and start walking around in the late stages of labor, particularly if you had a long early labor. I recommend strengthening the legs and lower body in particular by regular walking combined with strength training workouts that include squats, lunges, and single limb exercises. 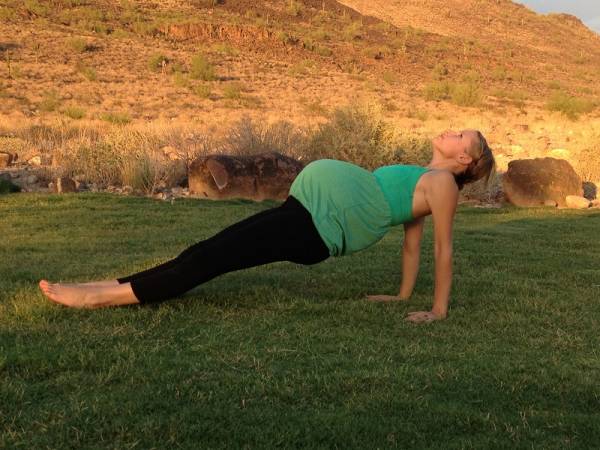 I could list many more benefits, but these are the three that come to mind first. However, I would emphasize that weightlifting should be part of a bigger picture.

For example, during my last pregnancy I also focused on releasing the psoas and practicing abdominal and pelvic floor release to help during labor and delivery. I did a lot of natural movement workouts that integrated crawling and squatting, like a Primal Move workout.

I highly recommend looking into Spinning Babies and the work of Katy Bowman and the Restorative Exercise Institute for further information about alignment, optimal fetal positioning, and labor preparation.

Together with these practices, I can confidently say that weightlifting made this pregnancy, delivery, and postpartum period my easiest so far.

What I can assert with absolute confidence is that I have witnessed the benefits of continuing with resistance training in myself and in clients.

There was a moment during the pushing stage of labor when I screamed “I can’t get the baby out!” (I laugh now, but it felt quite serious then.)

The nurse forced me to look at her and said, “Your body is doing exactly what it needs to do. Just let it do it.” It was exactly what I needed to hear, and a few pushes later I was holding my son.

One thing is certain: every fitness endeavor you undertake during pregnancy should heed that nurse’s advice.

How that looks will vary, but if you have a weightlifting habit that you’d like to continue during pregnancy, don’t think you have to put your barbell in storage for the next nine months.

What is your experience with weightlifting during pregnancy? Do you know of any relevant studies on the topic? Please post stories or links in the comments!

3. Barakat R, et al., “Type of delivery is not affected by light resistance and toning exercise during pregnancy: a randomized controlled trial,” American Journal of Obstetrics and Gynecology, December 2009.