If we can make small changes, then we can reverse a downward spiral and create an upward spiral.

The phrase “the rich get richer” can be applied to health as well as money. Every small change we make today becomes a bigger one later due to compounding effects, or accumulation from accumulations.

I promise to make this quick, but I need to define compound interest. Let’s start with an example of two people who have $100. Person one, let’s call her Compoundia, goes to the bank and opens a savings account with a 5% interest rate. Person two, Linearea, goes to a different bank that tells her she will receive an additional five dollars a year for every year that she keeps the money in the bank. At the end of the first year, if neither person has done anything with her account, they both would have $105.

At the end of the second year, things start to change a bit. Compoundia makes 5% interest on her total deposit, so at the end of the second year, she would have $110.25. She made an additional $0.25 over Linearea because she received 5% interest on the $105. This accumulation does not make a big deal at the beginning, but over the course of thirty years the amount earned accelerates (in year 31, Compoundia would have $411, while Linearea would have only $245).

Now imagine this example of compound interest, but with our body weight. Anything we can do to slow down compounding weight gain will help us in the long run.

In a large intervention of U.S. veterans, one of the best findings was that the intervention stopped weight gain that would have normally occurred.1 The average trajectory was to gain 2kg per year, but the intervention was successful in that it led to a plateau in weight gain. (In this example, growth is more like Linearea’s bank; however, other models of weight change look more like Compoundia.) Sometimes not getting worse is an important outcome.

One of the biggest factors for accumulation of better health is the acquisition of habits. These habits can be related to diet, social activities, exercise, smoking, drinking, and so on. Imagine that Compoundia gave up drinking soda when she was eighteen. It might have been difficult at first, but she was able to do it.

According to Mirowsky and Ross this sense of control is the most important factors in compound change.2,3 The more small steps we accumulate, the more we feel we can do. By the time she was thirty, Compoundia no longer ate processed food and began taking nutrition classes. 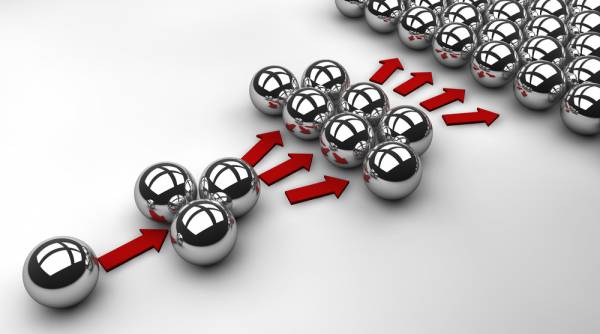 Education also accumulates over time. There is a long-standing relationship between education levels and health. The more people know, the healthier they tend to be. Each time you read an article your knowledge grows and adds up over time. This education helps you make healthier choices. It also accumulates in that your understanding from earlier articles helps you get more from later articles (accumulation from accumulations).

The Downward Spiral of Biological Accumulation

Body fat is probably one of the most known factors that can affect health. Having greater body fat leads to changes in hormones responsible for fat metabolism that make it easier to gain more body fat. Excessive body fat also affects our insulin resistance, which can later lead to diabetes. Thus, the less body fat we accumulate the better we will be over time. This means that even maintaining a healthy body weight can be helpful (similar to the veteran’s study; if on average people gain 2kg a year, then maintaining body weight can be very helpful).

If we can make small changes, then we can reverse a downward spiral and create an upward spiral. For example, exercise and good sleep habits tends to increase testosterone (and other hormones related to body fat metabolism). If we start making these health changes, then we might increase metabolic hormones, which leads to reduced body fat (and subsequently a greater metabolic hormone profile).

Environmental Accumulation for Good or Bad

Imagine the combined efforts of a couple that changes together. Each person helps the other person make changes. One way to conceptualize this is to have two pendulums connected to each other. One pendulum can help the momentum of the other.

Two connected pendulums, one helping the momentum of the other.

You can also imagine a relationship that provides drag to the pendulum (or a healthy lifestyle). We may not be able to change a great deal in our relationships, but we can be the influencing pendulum that helps promote change in ourselves and those around us.

Furthermore, you can imagine how occupation affects health. Workplaces that promote unhealthy behaviors build over the years. These unhealthy norms lead people to follow what has been done before. But you can be a force for change. You could start a program of walking at lunch, avoiding eating celebratory sweets, bringing healthier treats, have a standing desk, or conduct a greasing the groove program at work.

The most important thing to remember is that small changes make a big difference. Try not to get overwhelmed with all that “needs” to be changed. Making one small change can lead to the next small change and the accumulated knowledge that you can make changes. You, your clients, and your family members are learning to practice positive health changes – not to be perfect.

Often change is described as chipping away at a task. This analogy is good in that it portrays change as something that needs a lot of work. But positive change seems to have accumulating effects in that what we do now makes a bigger difference in later changes. Thus, it is almost like when we are chipping away at change that our chisel is getting sharper and that the chunks fall off quicker.

These ideas of change can certainly be applied to health, but also to other areas of your life. If you want to make things better, then start chipping away at that change.