We’ve been following low fat guidelines for decades, and they are killing us.

During the 1970’s, most health-related institutions began embracing the US government’s low-fat dietary guidelines. The public largely followed suit, accepting the guidelines at face value and striving to implement them. We now have decades of data with which to critique these guidelines and we can conclude, quite objectively, that they have failed.

Guidelines at Odds With History

The guidelines were supposed to prevent weight gain, diabetes, heart disease, and other chronic, degenerative diseases. Instead, the opposite happened, but why?

The US dietary guidelines contradicted, sometimes in radical ways, traditional human diets, including those as recent as our pre-Industrial Revolution ancestors. Specifically, the guidelines promote low-fat, high-carbohydrate diets, whereas ancestral diets were lower in carbs and higher in fat and protein.

Diets during the Paleolithic era varied greatly, because geographic variance made different foods available to different groups. This being said, we can make some generalizations about what our ancestors ate.

In the US, according to the National Health and Nutrition Examination Survey (NHANES), carbohydrate intake accounts for approximately 50% of total calories for adults; protein accounts 16%, while fat accounts for the remaining 34%.9

As you can see, compared to our ancestors, we eat more carbs and less protein, but our fat intake is comparable. Unfortunately, the types of fat most people eat today have changed considerably.

During the past half-century, health authorities encouraged replacing saturated fat with unsaturated fat. The former was deemed “bad fat,” whereas the latter was called “good fat” or “heart-healthy” fat.

To understand the consequences of this misguided advice, we need to review and summarize the various types of fat.

We were told that unsaturated fat is healthy, but this isn’t necessarily the case. As it turns out, instead of worrying about saturated fat, we should have been far more wary of omega-6.

Our Ancestors Ate Seeds, but Not Seed Oils

The US dietary guidelines still push polyunsaturated fat, but fail to adequately differentiate between omega-6 and omega-3. As a matter of accuracy, we can’t say that either omega-6 or omega-3 is “bad.”

In fact, both are known as essential fatty acids (EFAs) because the body requires them and can only get them from food. On the other hand, omega-6 causes big problems when we eat too much of it; and that’s exactly what has happened since the 1970’s.

The main culprits have been seed oils, a category of food that is relatively new to the human diet. Seed oils include:

The reason our ancestors never consumed seed oils is because extracting oil from these seeds requires special processing technologies, including high heat and hexane solvents. In other words, they avoided the problems associated with high omega-6 consumption by default, because they didn’t have access to omega-6-rich foods, like seed oils.

Every source of fat has its own unique distribution of fatty acids. As seen in the chart below, seed oils are disproportionately rich in omega-6. None of our traditional sources of fat even come close. Our ancestors certainly consumed omega-6—from eggs, nuts, seeds, poultry, and other whole food sources—but not in the quantities consumed today. 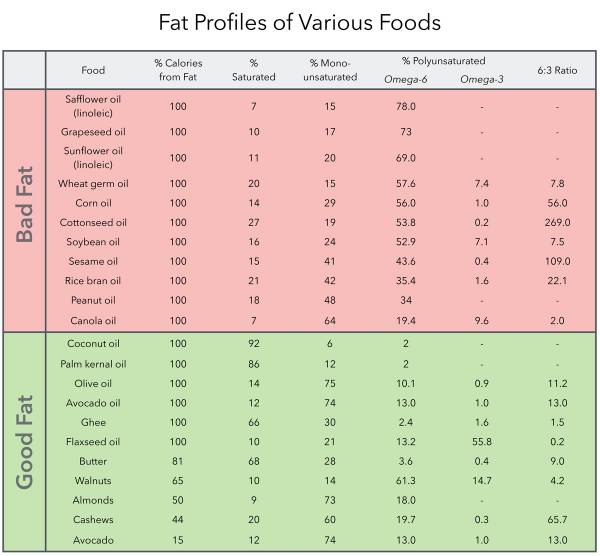 As discussed below, the omega-6 to omega-3 ratio is extremely important; higher ratios cause many problems. During the Paleolithic era, this ratio was very low (approximately 1/1), whereas today, ratios approaching 17/1 are common for Western diets.8, 11, 12

Why the Omega-6 to Omega-3 Ratio Matters

Omega-3 is one of the body’s most important nutrients. Some of its many beneficial properties include:

If we consume proportionally too much omega-6, we cannot effectively metabolize the omega-3 we consume. This is because omega-6 and omega-3 compete for the same enzymes, which break them down into components the body assimilates.18

In other words, you won’t necessarily reap the benefits of increased omega-3 consumption unless you simultaneously decrease your omega-6.

In 2010, the British Journal of Nutrition published a meta-analysis of randomized controlled trials involving the replacement of saturated fat with omega-6 polyunsaturated fat. Doing so, the study demonstrated, actually increases all-cause mortality.19 A similar study, published in 2013, corroborated these results.20

Despite the mainstream view that omega-6 is healthy, there are many reasons to conclude the opposite. Limited consumption of omega-6, as per our ancestors (less than 3% of total calories) is ideal, but modern consumption levels have many consequences, including the following.21, 22, 23, 24, 25

Practical Advice: Learning From Our Ancestors

Everyone knows there is “good fat” and “bad fat.” Saturated fat, however, isn’t the nutritional menace it’s been portrayed as.

That role should go to seed oils, based on their excessive omega-6 quantities. The US dietary guidelines have many flaws, especially with respect to fat. The following guidelines, though greatly simplified, are more aligned with ancestral diets as well as contemporary nutrition science:

21. Lands, WE. “Dietary fat and health: the evidence and the politics of prevention: careful use of dietary fats can improve life and prevent disease.” Annals of the New York Academy of Sciences 1055 (2005): 179-92.