When you can hold a freestanding handstand you’ve achieved a pretty amazing skill. While this is something that almost anyone could work up to with persistence and the right game plan, most people do not.

It is even more amazing to achieve this skill as an adult. Lots of kids do it, but because they weigh less and are not as tall, the skill will come more easily to them. Not to mention the fact that kids generally have an easier time learning many things.

When you can hold a freestanding handstand you’ve achieved a pretty amazing skill. While this is something that almost anyone could work up to with persistence and the right game plan, most people do not.

It is even more amazing to achieve this skill as an adult. Lots of kids do it, but because they weigh less and are not as tall, the skill will come more easily to them. Not to mention the fact that kids generally have an easier time learning many things.

But have no fear if you’re not a kid. I learned the freestanding handstand as an adult at 6’2” and weighing 180lbs. Plus, there are guys much bigger than me who have gone on to perform even more impressive hand-balancing skills.

Work on Your Lead-Up Stunts

In the previous article, I showed you several lead-up stunts for the handstand. By practicing these you’re going to build the foundational skills you need to do a freestanding handstand.

These skills are easier to build through these progressive movements (wall handstand, frog stand, headstand, forearm stand), than if you just went straight for the freestanding handstand itself.

Most people won’t have the patience to stick to these easier skills, but if you do, then your work will pay off, making your efforts in the free handstand that much easier when you finally start it.

The Importance of the Kick-Up in a Freestanding Handstand

When thinking about the handstand there are two main parts: getting into position and balancing.

When I was first learning the handstand I made many mistakes. Although I had practiced for a couple years off and on, I was far from consistent. I would kick-up and immediately fall over probably eight times out of ten. This was not just a waste of time but of energy as well.

If you kick too hard or too little, you’ll not be able to get into the “sweet spot” where you can even begin to balance. Thus the battle is lost before it begins. But a proper kick-up sets you up to actually start balancing.

The goal is to be able to kick-up with the same amount of force each time. This gets you into a balanced position, or at least close to it so you can control your body by over or under balancing, to get into a neutral alignment.

Everyone focuses on the balancing, but that doesn’t matter if you can’t get there in the first place. Once you can kick up and enter a handstand where you are balanced nine times out of ten, then you’re really ready to start focusing on the balancing of the handstand.

There are several different methods of kicking up. The most common involves keeping the arms locked out overhead, lunging forward and kicking up into place. This is how gymnasts do it (of course, getting into a straight-bodied position). 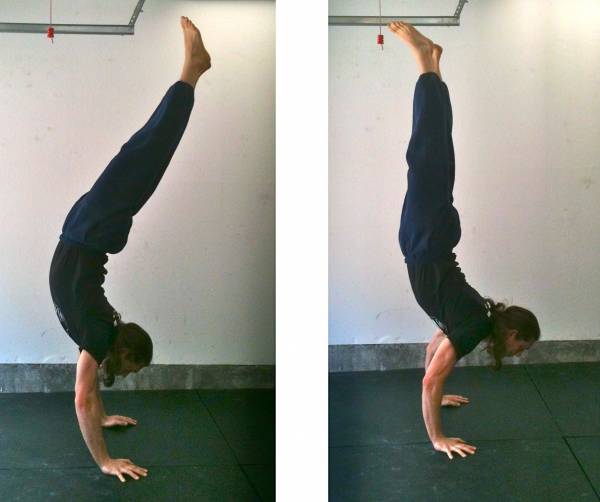 What you want to avoid is walking on your hands in order to catch your balance. Walking is easier in that you can catch yourself by taking a step, but this should not be relied upon. Walking is a more advanced skill that should be done under control at all times.

Another thing to avoid is bending the elbows. Although this can be used to save some balances you don’t want to use it habitually. Instead keep the elbows locked out and use the hands and shoulders instead.

If you have built a firm foundation with lead-up stunts, then practice your kick-up, you’ll find the balancing aspect isn’t that difficult. By following a smart progression like this you’ll cut your learning curve in half if not more.