Doing a handstand against the wall is not a difficult move to do. It doesn’t require much strength, as when you do it right, you’re using your structure more than muscle. It takes some coordination and balance, though. So if you’ve never done it before that can be the hard part. But with a little practice, just about anyone will be able to achieve this.

Note: The freestanding handstand, which I’ll cover in a future article, is a different matter altogether. This move takes far more practice, but once again if you’re willing to put in the work, you can achieve it.

The most difficult piece of the handstand for most is simply being upside down. If you’re not used to this position – and most people aren’t – then you’ll find you tend to lose control of your body when you do go upside down. That’s why I say coordination is the biggest thing you’ll have to learn.

Use the Headstand to Get Used to Being Upside Down

A stepping-stone towards the handstand is to practice the headstand. In the beginning I recommend doing this against the wall, as well. Set your hands on the ground about shoulder-width apart or slightly wider. Your head should be in advance of your hands so that the three form a triangle, not a line. This tripod handstand gives you a wide base and is easier than other forms of the handstand often done in yoga, where the hands are folded behind the head.

Once your hands and head are set, then kick one leg, followed by the other – until you are upside down. Hold this position and don’t forget to breathe. That’s a critical part of learning how to control the move and even relax in it. Take a look at this video for a visual guide and further pointers:

Curved vs. Straight Handstands and How to Get Up

If you are training for a straight handstand, you’ll want your chest to face the wall. To get into this position you start in a pushup position next to the wall and walk your feet up until you are vertical. Another option is to cartwheel into place. 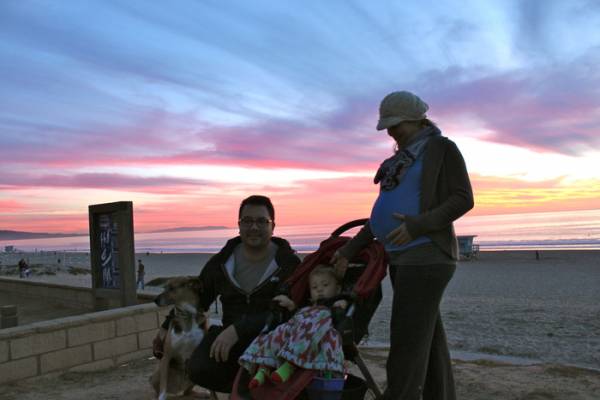 The curved position is easier and will have your back facing the wall. To get into this position, you kick up into a handstand. As a beginner, the best way to do this is to start in a sprinter’s stance. Have both your hands flat on the floor with your elbows locked out. One knee is bent at about ninety degrees and the other is close to straight. Kick up and toward the wall with the back leg, and then jump up with the other.

The kick up is a tricky part for many people. But all it takes is a little practice. Sometimes you’ll use too much power (hopefully not so much that you put holes in the wall). Other times you’ll use too little and not get up into the handstand. Better to err on the latter at first, and then just increase the amount of force a little bit with each attempt until you get up there. Once practiced, you’ll land like a feather against the wall. Watch this video for instruction and demonstration:

Tips for the Handstand Position

Now that you’re in the handstand what do you do? Hold for time. This can be a great exercise to teach whole-body coordination as well as maintaining tightness under pressure. Its great to do as a finisher after many workouts.

Build up to a minute or more. The easy way to do this is to simply try to do more every workout. But in doing this, you’ll quickly plateau. So instead, or once you reach that plateau point, back off in time and do more sets. Make it easier to hold it and do more total volume. This in turn will lead to a longer single hold.