When we are trying to get in as many reps as possible or get the lowest time, we may lose sight of our goals of getting fit, looking better, and continuing a healthy lifestyle.

When I teach college courses, I am always the happiest when I find students who are chasing knowledge rather than chasing a grade. Many students’ questions relate to how they can do better on the test, rather than to improving their knowledge. I can’t really blame them as I certainly worried a great deal about my grades as well when I was in their position. It is the system of reinforcement in academics. That is, people are primarily motivated to get good grades and in the process we hope they learn. The problem with the reinforcement system is it teaches that we only have to perform up to the grading standard. “If I have a 94%, then I only need to get an 85 or above on this next test to keep an A.” Students learn how to be efficient in their studying in order to get the grade they want.

CrossFit has a similar issue. Many times, we work toward improving our time or getting more reps rather than performing a virtuous movement. A quantifiable score is an excellent idea in that it helps us consistently measure and gauge improve, but as a reinforcer it teaches us to figure out ways to be efficient to get the best score. We could more cynically state that it teaches us to cut corners.

For most people, CrossFit is an awesome general physical preparedness (GPP) program. For a select few, it is a sport. When CrossFit is a sport there is a built in reinforcer of winning as the ultimate outcome. However, for most people coming into CrossFit, the goal is getting fit and staying healthy. Doing the movements quickly helps with the first goal, but staying healthy and not getting injured relies on doing the movements properly (although we really don’t know about injury rates in CrossFit). When we are trying to get in as many reps as possible or get the lowest time, we may lose sight of our goals of getting fit, looking better, and continuing a healthy lifestyle.

The Old Man and the Rocks

Thus, as the internal reinforcer changed to an external one, the boys behavior became more dependent on the outside reinforcer. I don’t think we are going to take away fitness if we take away people’s clock, but we can really change how people feel about exercise. They might be much more interested in spastic-like kipping pull-ups because of the clock rather than taking a few more seconds to feel proud of doing strict pull-ups.

The Solution: Our Coaching and Our Programming 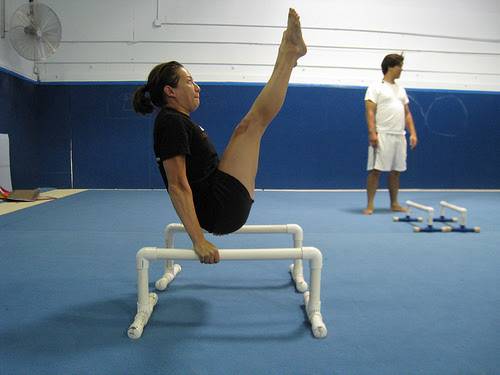 Greg Glassman, the founder of CrossFit, said, “The magic is in the movement.” Gymnastics is a sport where the score is based on how well the movements are performed, rather than on how many reps are done. Taking some of these principles into the programming of workouts might make our students better athletes. The CrossFit Training Guide describes having skill-only days (in the programming section). Focusing a day on how well a skill is performed could be important to the long-term fitness of athletes. (Training doesn’t have to crush your soul every day). Another potential solution is to change the standards to be stricter. That is, we can focus the standards onto the beauty of movement rather than how quickly it can be done. For example, the sport of competitive kettlebells has rules on locking out on the top of exercises for a certain amount of time. This forces competitors to maintain control. In the CrossFit community, we could certainly prioritize more strict standards for gymnastics movements.

An even simpler solution is to use more video. Peer norming is a powerful motivator and if people are thinking more about how they look they will perform the movements better. The current norm of putting a score on the board reinforces finding shortcuts to get the best score. However, we could focus more on how we look or how we will look to others (economists call this important incentive the moral incentive, as we care how we look to others). Even the perception that people might see my WOD changes the way I perform. I know I definitely lock out better, squat deeper, and perform much stricter movements when the coaches bring out the camera (even though I still make my constipated Popeye face). There are some great smartphone applications to take video and many online tools to display them easily (at our box, we use Coach’s Eye and upload videos to Google+, Facebook, or Instagram).

How do you incentivize quality movement at your gym? What solutions and tools have you come up with? Please post your ideas to the comments below.

Continue by reading Part Two of “It’s Not CrossFit’s Fault”.