Powerlifting Versus Olympic Squats: Which Is Better?

Even though they are both legitimate, there is a difference when considering the utility and risks of each method.

Generally speaking there are two ways to squat: powerlifting or Olympic style. Even though they are both a squat and legitimate techniques in their own right, there is a bit of a difference when considering the utility and risks of each method.

Both squat styles involve tossing some weight on a barbell, placing it on top of your shoulders, and then dropping your butt down. But within that, there are some significant biomechanical differences between the two. These differences are mostly related to two factors: bar and foot position. Olympic squats are typically performed high bar with a narrow stance, while powerlifting are done low bar with a wide stance. Let’s take a look at some examples.

The bar should rest on the athlete’s upper traps and the heels are below the shoulders or slightly closer. The knees should be pushed outside of the heel on the way down. The result of all of these things is that the Olympic squat tends to emphasize your quads and trunk stabilizers, while still using a fair bit of gluteal recruitment.

I’m sure you’ve heard “in a squat your knees shouldn’t pass your toes.” In a general sense, this cue is meant to prevent athletes and patients from putting a significant shearing force on their patellar tendon. But check out the bottom position of this squat (pictured above). My knees are right at my toes if not a bit past them.

As far as an Olympic squat is concerned, the cue about not letting your knee track forward is garbage. A taller or more mobile athlete may exhibit a squat where the knees pass the toes, but as long as form is otherwise in check and the heels maintain contact with the floor, proper gluteal recruitment in this position should prevent any significant shear to the tendon. But remember, kids, this is not a blank check to start throwing your knees forward on your squats. Proper form is still paramount.

The bar is below your upper trap, resting more on your rhomboids, and the stance is significantly wider. This contributes to more forward lean in the squat and typically less depth. Although that’s not to say powerlifters can’t or don’t squat low. It depends quite a bit on the judge, but in a powerlifting competition you only need to hit parallel or slightly below it for the lift to count, so this style of squatting was more or less developed to maximize the amount of weight that could be lifted within those parameters. 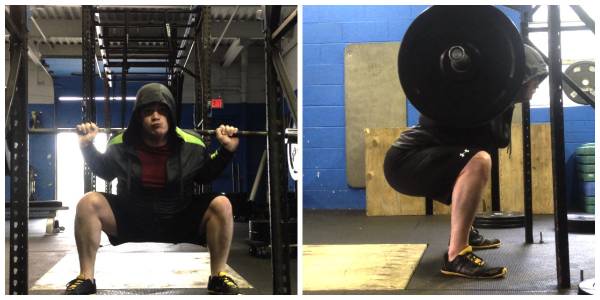 By widening your stance and sticking your butt back more, you utilize more of your glutes, hamstrings, and adductor muscles. The total range of motion is also reduced to a degree that translates to heavier weights. I’ve seen footage of athletes squatting some absurd amounts in an Olympic stance, but to my knowledge the world’s heaviest squat records were achieved using a powerlifting-style squat.

Which Squat Style Is Better?

Hopefully you’ve already determined that neither of these forms is altogether better than the other. In terms of athletic performance, “better” refers solely to your goals.

The Olympic squat is the natural squat. Call it what you will: the third world squat, the Paleolithic chair, that thing you do to pick stuff up off the floor. The mechanics of the Olympic squat more closely mirror how our body wants to naturally accomplish that motion. If you don’t believe me, check out these babies.

That being said, from a technical standpoint an Olympic squat is typically much harder for us to learn unless you’re one of those lucky athletes who started training properly as a child. We can’t all be Klokov (or Froning for that matter). Sort of funny that the natural way is harder, no?

Pending you don’t have any particularly crazy musculoskeletal abnormalities, the powerlifting squat will let you squat more weight. It will also allow you to bypass a lot of the mobility required to hit a full-depth Olympic squat. There’s a reason Oly shoes have a heel platform and a lot of competitive powerlifters squat in zero drop shoes. The powerlifting squat doesn’t require you to have the same level of dorsiflexion. For reference, I’m wearing zero drop training shoes in these photos. If I had been wearing Oly shoes, you’d be seeing even more knees forward.

There Are No Strict Rules When It Comes to Squatting

The reality is there’s hardly only two ways to squat. I’d wager there are closer to seven billion ways. These guidelines are just that, guidelines. I’ve seen people have a lot of success with hybrid squats that take a little inspiration from both techniques. I’ve also seen programs that utilize both squats in their periodization. It’s not so much about adhering to someone’s arbitrary movement standards as it is understanding which mechanics to use and why.

The powerlifting squat has a whole hell of a lot more chance for valgus collapse because your knees are over your feet or just inside of them, whereas in an Oly squat your knees are pushed in the other direction. I wouldn’t recommend using a high bar position on a powerlifting squat due to the enhanced forward lean. Raising the bar higher technically increases the length of the lever arm and puts more stress on your lower back. At the same time, I’ve seen powerlifters collapse their knees on a 600lb attempt and walk it off and I’ve seen people squat crazy weights with a high-bar powerlifting squat. There is no universal absolute. Just a lot of good guidelines.

A Special Note About Foot Position

Before I finish, I want to make a short note about foot position. People talk a lot about where your toes should point in a squat. Kelly Starrett, for example, recommends trying to keep the feet completely straight during an Olympic squat. I recognize that he’s coming from a place of trying to establish a stable ankle, stable knee, and stable hip by creating positioning that allows for the greatest torque generation through those joints. I also recognize that if you do a Google search of Olympic lifts, the majority of elite athletes tend to have something of a turnout. And another thing people say is that it’s easier/better to keep your feet forward on a powerlifting squat due to the increased width of the stance. I’m going to refer these people to Chris Duffin’s world record raw 390kg squat:

I think it’s safe to say he knows what’s up.

Olympic or powerlifting, narrow, wide, short, tall, whatever – it doesn’t matter. There are a lot of choices to be made when squatting and more than one right way to do it. Just make sure you’re making your decisions for the right reasons. Now get out there and go squat something heavy.