Could it be the word courage invokes an ancient energy of which everybody has a somatic awareness that transcends levels of experience and structural patterns of posture and movement?

Somewhere along the way as a yoga practitioner I began to notice my body craving certain yoga poses as a way to express or affect my mental state. For example, a moment of new insight finds me wanting to do a headstand or a handstand – an inversion being the shape my body wants to take to express a new perspective. Yet when I feel stressed, I’m drawn to viparita karani (legs up the wall pose) – a position that immediately relaxes my body, calms my nervous system, and changes my mental state from one of frazzle and frustration to quietness.

The Dance of Body and Mind

These examples are two of the countless ways in which asanas (poses) allow the body and mind to dance as one, and illustrate how the mind works its way into the body and the body into the mind. This dance between mind and body is what I like to call the psychology of asana. Donna Farhi sums up the dynamic I’m speaking of with her description of the evolution of asanas in her book, Yoga Mind, Body & Spirit. She wrote, “Through their observations of nature, the yogis discovered a vast repertoire of energetic expressions, each of which had not only a strong physical effect on the body but also a concomitant psychological effect.”

In large measure the body is an embodiment of what you’re thinking. With the vocabulary of movement gained through the practice of asana, a yoga practitioner may find him- or herself drawing upon that vocabulary regularly to express a mental state physically. In the same way teachers and students can also draw upon mental concepts (a concept being “something imagined or pictured in the mind”) in order to affect the physical aspects of a yoga pose.

This was made powerfully evident to me one day as I was practicing handstand. I found myself thinking the word “courage” to the extent that it became a mantra, repeating itself over and over in my mind. Connecting with this word and its meaning, I felt my hands becoming firmer in their contact with the floor, my arms were more straight and strong, and my shoulders aligned in a way they never had before. I was experiencing concretely the power of a mental concept to directly impact my physiology in a yoga pose. My handstands have never been the same! This instance was an awakening and launched my exploration of incorporating these concepts into my instruction as a yoga teacher.

While there are as many concepts as colors in the spectrum, we’ll focus on where it all started for me, with the idea of courage. Courage is defined as, “mental or moral strength to venture, persevere, and withstand danger, fear, or difficulty.” I’ve found using “courage” as a cue elicits similar responses among students in a yoga class, manifesting in their bodies in the heart center, chest, and sternum, as well as in the hands and feet, giving a grounding influence to whatever is touching the floor. 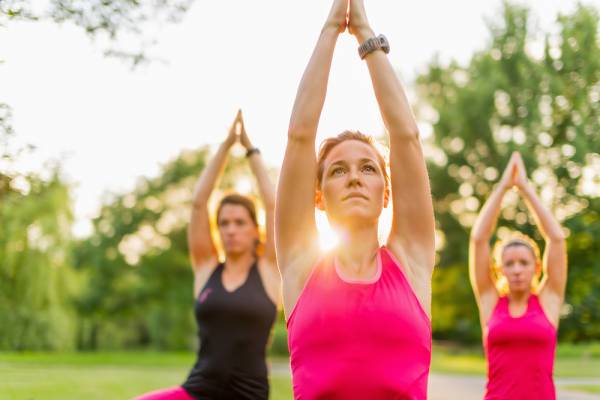 Given the heart-opening influence of courage, it’s not surprising the word has its origins in the Latin “cor,” which means “heart.” It makes sense that courage would manifest itself in the body in the opposite way of discouragement, which is seen in protracted shoulder girdles, sunken chests, and hanging heads. Courage strengthens whatever is touching the ground giving everything above more resilience and allowing practitioners to experience more fully the root and rebound effect.

It’s fascinating and thrilling to look out as a teacher and see bodies adjust at the mention of a word. Like a Rubik’s cube, all the pieces align – the shoulder blades coil into the back, the collarbones widen, the sternum lifts, the neck lengthens, the body grounds itself more strongly, and the gaze becomes confident and unstrained. Could it be that the word courage invokes an ancient energy of which everybody has a somatic awareness that transcends levels of experience and structural and energetic patterns of posture and movement? This would explain how these shifts occur even in students who don’t yet have the coordination to make such adjustments with physical alignment cues alone. That makes concept cueing a pretty powerful tool to have in your yoga teacher toolbox.

Suggestions on How to Cue Courage

If this sounds exciting and you’re ready to integrate some concept cueing into your classes, then the language you choose will be important. A great way to develop your verbalization is to give yourself verbal or nonverbal (if you’re in a public class where speaking would be inappropriate) cues during your own practice to see what resonates with you. This will help you find your own unique style of expression.

I often frame the cues as questions. I also prefer using “I” instead of “you” so each student takes direct ownership. For example: “How could I embody more courage right now?” “What area of my body needs more courage?” “What would courage look like in my chest right now?” “What would courage feel like in my feet?” In addition to questions, which are very effective, I use statements like: “I am the embodiment of courage here and now.” “Feel courage in your body, in your chest, in your feet.” “Feel courage lift you higher.”

I will also simple say the word “courage” on and off throughout the class. As yoga teachers, we aren’t given a script, so intuition and being fully present with your students will guide you as to the best choice of words in any given moment. More important than the words, is your authentic connection with them and the energy that carries them out. If you’re fully grounded in the concept you’re applying, it will have a powerful effect on your students. That’s why exploring this method in your individual practice is an important precursor to integrating it into your classes.

The Application of Courage

Now let’s look at a few simple poses and how they might be, from what I’ve observed, most commonly affected by the concept of courage. Obviously this is only a small sampling of potential poses to work with. There are expansive possibilities both within these poses and in additional ones.

To sum it up, whether you’re a student or a teacher, weaving a concept into your practice and tapping into the psychological aspect of asana is a powerful way to directly affect positive change on the physical level. This in no way means that we neglect instructing the physical. It’s simply another avenue in addition to, not in place of physical cues.

It’s also important to use your skill and intuition to incorporate this approach at the appropriate level for you and your students. My experience with this way of teaching is only the starting point. There is no formula. Infusing your unique style and insight into whatever concept you choose to incorporate, you will create something original and beautiful. My hope is that this asana psychology or mind-body layering approach becomes a gateway for yoga teachers and practitioners alike to find the “inner divinity” that B.K.S. Iyengar depicts so beautifully in his book, Light on Life:

In order to find out how to reveal our innermost Being, the sages explored the various sheaths of existence, starting from body and progressing through mind and intelligence, and ultimately to the soul. The yogic journey guides us from our periphery, the body, to the center of our being, the soul. The aim is to integrate the various layers so that the inner divinity shines out as through clear glass.