Size Matters: How to Spot (and Be) a Good Training Partner

As a smaller person, one of your biggest strengths is your speed and ability to exploit the holes in the game of your opponent.

I stated that once the women were more technically sound and able to defend themselves better, they could transition to a co-ed class. Rolling with a much stronger partner who is going balls-out for submissions doesn’t help women progress. Not when they’re just starting out.

But sometimes having a separate class for women isn’t possible. And it’s not only the women who are smaller and weaker, there are small guys who get discouraged while rolling with larger people, as well. At some schools, children are training with adults, as well.

As training partners and instructors, we have to adjust our intensity to accommodate those students. So what tactics can we use that will improve the games of both partners?

Advice for the Heavy Rollers

When two new people are rolling together and one is much larger or stronger than the other, you big people should limit your submission attempts to chokes and finish them with slow, even pressure.

It’s very easy to injure someone’s arm or shoulder if you twist it the wrong way. While it’s also easy to crank someone’s neck and screw up his or her jaw if you’re trying to choke the face rather than the neck, the fault in that scenario lies with the person who wouldn’t tap.

If you’re a new guy and you’re really big, why not let your smaller training partners start on top and work from there? Defense is as important as offense, and you will be glad you have experience when you find yourself in a sticky situation with someone your own size.

When I roll with big guys at my academy, we usually choose to do a guard passing or top control match, which helps both of us. I get to practice solidifying my top position while my training partner tries to escape. I also get to practice transitioning through submission attempts from mount and maintaining position while he defends.

During his appearance on Eddie Bravo Radio, BJJ superstar Garry Tonon explained that he puts himself in submissions during rolls just so he can practice his defense. Garry’s defensive game has helped him survive tough matches to come back and win in the end.

Staying relaxed in uncomfortable positions is a big part of jiu jitsu. Your defensive game can literally save your life if you find yourself in a bad spot outside of the academy. Little guys are constantly working defense. As a bigger guy, you should make sure you get some practice as well.

Advice for the Lightweights

As a smaller, weaker person, one of your biggest strengths is your speed and ability to exploit the holes in the game of your opponent. Perhaps your partner’s side control technique isn’t sound or he or she don’t know how to maintain mount properly. Because you’re smaller, you’ll be able to squirm out of tight spots more easily.

I think the most important thing you have to learn as a new student is that other brand new students will match your intensity during rolls. You both want to win and if you’re going hard, so will your partner. When one or both of you are clumsy and flailing, accidents can happen.

95% of the time, the stronger person will dominate the match and the smaller person will be sour or upset. So if you’re David going in to fight Goliath, slow it down and focus on technique. Like I said, your partner will match your intensity. If your partner still goes really hard, try to get to a safe position such as turtle and protect yourself. 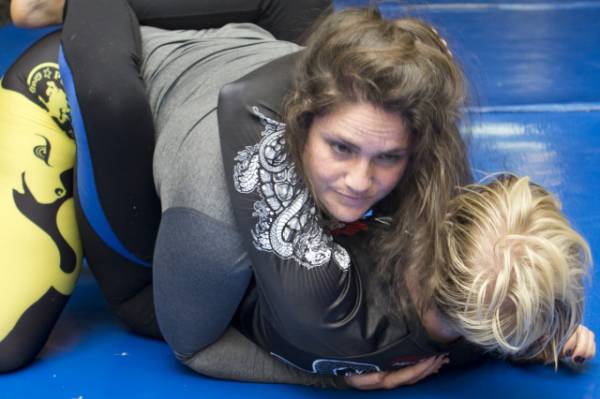 My second bit of advice is to tap. Even if your partner isn’t doing the submission right or even if you know you’re “better’n him,” just tap. Who cares? It’s just a roll. I like being able to chew my food, open my own doors, and walk without a cane more than I like holding out those extra ten seconds between when I felt like I should have tapped and my ligament snapped.

Finally, don’t get discouraged if you can’t tap the big guys. Practice controlling your opponents the best you can by using good base, applying pressure, and taking away their ability to use the floor to generate power.

You will have to work hard to find the techniques that work for you and you will have to struggle to practice them. Stephan Kesting, Emily Kwok, and Brandon Mullins have released some really great instructional DVD sets called How to Defeat the Bigger Stronger Opponent that can help you to figure out what to focus on.

Phil Migliarese teaches maintaining the back:

Marcelo Garcia teaches seatbelt control from the back:

Tips for All Beginners

So how can you tell if you’ve been a good partner? The best way to tell is if your training partners ask you to roll again next time. If everyone is avoiding you, you could be awful (or you could just smell bad or have long, gross toenails). 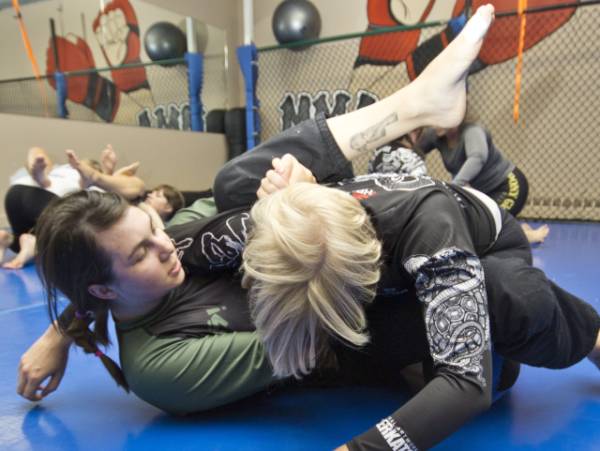 Look at your partner’s facial expression after the roll. If you’re happy and feel as though you’ve had a great roll, but your partner is avoiding eye contact and wants to get away from you, you may have been a little intense. But then again, your partner could simply have a bruised ego. As you get to know your teammates, it will become easier to assess.

Another thing to consider is that if you’re getting tapped regularly by people your own size and belt level, but you’re feeling like a jiu jitsu wizard when you’re rolling with smaller, weaker opponents, it’s likely you’re using muscle, not jiu jitsu.

There will always be accidents. If you’ve done everything right, and you still hurt your partner, Valerie Worthington has provided some great advice in her article, When You Hurt a Training Partner. Until next time, have fun on the mats – and play nice!