STFU and Get to Work: Why You Didn’t Make the CrossFit Games

What’s up with the big names not qualifying for the Games? Rocky came back to win at the end of Rocky III. But only after he STFU and got to work.

I never pass up a good Rocky reference. The film: Rocky III. The scene: Rocky has agreed to fight Clubber Lang, played masterfully by a young Mr. T. Rocky, knee deep in his own celebrity, is more concerned about pageantry and hype than he is with actual training. Meanwhile, Clubber is alone, no hype, no lights, no distractions, just training. You can see the entire awesome, classic scene here. And guess who wins the fight?

The Danger of Success and Self-Promotion

Lots of big names have, so far, failed to qualify for the CrossFit Games. There have been some extremely large expectations dashed. Can we draw a line between how much an athlete chooses distraction, hype, self-promotion, selfies, and promo-codes and how he or she performs?

It’s a tenuous connection, perhaps, but an intriguing question, nonetheless. Because for every photo session, every minute spent designing t-shirts, every interview done, someone else is in the basement working, like Clubber Lang. You’re up in the posh casino workout room half-assing your workout and your opponent is on a snowy hillside dragging a sled. (Yeah, I just jumped to Rocky IV, but you get the point.)

Stop taking selfies and get to work.

Getting caught up in distractions, hype, and your own self-made celebrity can be a liability. While there is nothing wrong with promoting yourself, this weekend’s CrossFit Games Regional events may have demonstrated that there is a balance to be struck between becoming the hype you have created and simply putting your head down and doing the work required to dominate. In other words, you can say, “I will,” or you can just do it.

Had anyone really heard of Nicole Holcomb before this weekend? Most likely you hadn’t.

Nicole started CrossFit in late 2011 and qualified for her first regional competition in the Central East in 2012. I had the pleasure of judging her during one event at the 2012 regionals and I was struck by how consistently perfect her reps were. Hundreds of reps in this squat-shoulder-to-overhead-pull-up workout, and not a single no-rep. In the corrals backstage, she was quiet, unassuming, and humble.

Slightly intrigued by where she might go with her CrossFit career, I began following her on Facebook. And there is very little there. She doesn’t seem to have a Twitter or an Instagram account, and her Facebook page is devoid of much, other than others posting about how much they appreciate this coaching tip or that word of encouragement. The only post that made my eyes pop was a 165lb snatch sometime in late 2012. This, again, caused me to wonder just how far this young lady might go in the sport.

Nicole doesn’t appear to have any sponsors, promo codes, followers, or a fanbase other than friends, family and CrossFit 812, the box where she coaches. Yet, she placed first, third, third, fourth, seventh, fourth, and third. Like a stealth bomber, she came in and quietly dropped her payload, collected her ticket to Carson, and went on without so much as a selfie.

Put down the smart phone and get to work.

I can picture Nicole, like Clubber Lang, in the dimly lit gym, early on a Sunday morning, doing pull ups from makeshift strings, doing upside-down sit-ups hanging from her knees, while her competition is prepping for an all-satin, sports-bra, single-under photo shoot, while someone sells hashtagged t-shirts under a neon “Icanandmust!” sign. Rocky thought he would easily win. Clubber kicked his ass.

Put off the photo session, and get to work. 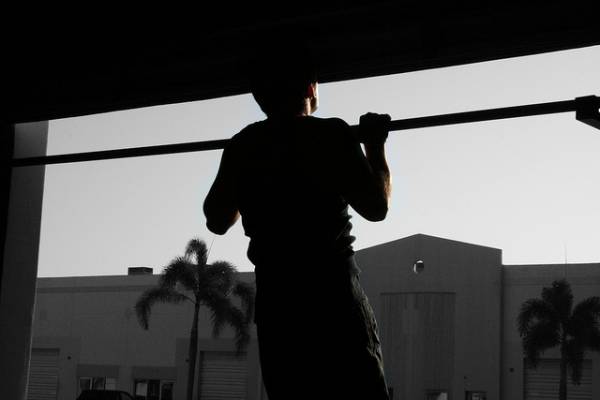 Time to Go to Work

There are certainly exceptions to every situation but the fact remains, for every bit of press and self-promotion you are doing, it’s one less hour of training and one more bit of distraction. Would you rather be the most famous person who failed to qualify or the biggest unknown who is headed to Carson? If competing is truly your goal, you choose the latter. Which means STFU and get to work.

I get that fame is cool. Everyone wants his or her fifteen minutes. But, there are some really, really well known athletes who have yet to put their money where their mouth is, and I am not just talking about the Central East. We have a couple of weeks of regionals left. I would offer to the remaining athletes who are flooding Instagram with pictures of sponsor gear, hashtags, and fitspiration pictures – your competition is working out right now.

While you’re appearing on Sub 3 Minutes, someone else is doing weighted muscle ups. While you’re consulting with your logo designer, your competition is rowing for calories. And if you’re not careful, he or she is going to drop a stealth payload on you at the games and you will wind up fourth, or eighth, or not at all.

Rocky came back to win at the end of Rocky III. But only after he STFU and got to work.