Pop Quiz: If you are a competition athlete at a box that offers a competition track, do you know the people who attend group classes?

A Unified Community of Believers

When CrossFit first began, community was a given. CrossFit gyms usually offered one style of training, the group WOD, at specific hours of the day. Everyone would meet at 12:00pm, gather around the whiteboard, and the coach would lay out the plan for the warm up, the workout, and the cool down.

Everyone was one big happy family. There was no pecking order, except in regards to the box firebreather. This was usually some guy named Franco or Skiff, and our whole lives centered around seeing what score Franco would put on the board for the day’s WOD, and then seeing how close we could come.

When the coach called “3, 2, 1, go!” the whole gym, in unison, became a community of believers, pounding through “Fight Gone Bad” together, or doing “Barbara,” “Fran,” or “Murph” as a family. And everyone collapsed together, in a heap of sweat angels, at the end.

Along Came the Competition Craze

Then came the CrossFit Games. And with them, competition athletes. Regionals teams. Competition programming. As the sport grew, so did a noticeable caste system within many boxes. The pecking order began to take shape, and a hierarchy began to crystalize.

It used to be that only the coaches within a box would be off doing their own thing after the workouts were over. But before long, you saw Skiff and Franco working out with the coaches, no longer coming to class. Soon, the class was off to one side, and the box was lousy with athletes peppered everywhere, doing things that were not on the whiteboard, coming in at odd times, and working in small groups.

And while it’s a good thing that competition tracks, open gym, and the ability to train individually have developed, allowing many athletes to take a shot at regionals, the national level, or simply become much better in local competitions, the downside of this new system is that barriers have developed as well. These barriers arise from the natural cliquing up of small groups, but can be made worse when one group starts to believe the work they are doing is more important than the work others are doing.

On one hand, it’s natural to circle the wagons around your own clique. It’s the way we tribe up as a species. On the other hand, there is a real divide that can occur within the box that can cause a rift in your community. And box owners, it’s hurting your bottom line.

I have heard from a number of people over the years on this topic and the one thing that seems to keep cropping up is that the people who attend classes can often be made to feel like second-class citizens by competition athletes. Now, I suspect that 99.9% of the time this is completely unintentional. However, it doesn’t change the fact that it’s a real issue.

What likely occurs is that, as I stated above, people tend to stay within their own groups. Once you’re a competition athlete, those are your peeps, man. Those are the folks with whom you have common talking points. They speak your language, they know your pain, and are the people with whom you are comfortable. Similarly, if you attend the group classes, the same thing goes.

This is the comfort zone. It happens in any organization that is growing. As the organization gets bigger, it gets smaller, by way of subgroups. 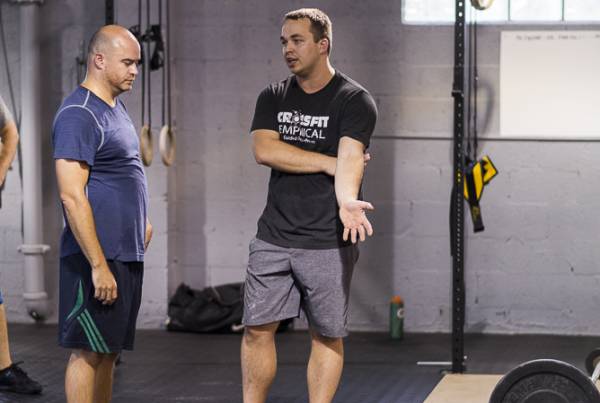 Perception is Reality: Be Careful

But many times, those in the classes feel slighted by the competition folks. The perception can be that those participating in the competition track feel their training supersedes that of the classes. They use the platforms, the good plates, and the rings. They wheel the ergs over into their own walled-off corner, commandeer the music and the fans, and roll their eyes if there are no women’s bars left.

Once, (this really happened) I was coaching a class, and eight minutes into an ass kicking ten-minute AMRAP, one of the gym’s competition guys walked over and switched the music completely off because he wanted to sit and eat his sushi in peace. Just turned it clean off. How does that make the class feel?

Keep in mind, that perception is reality. If those who attend regular CrossFit group classes feel the competition athletes see themselves as more important, then this is the reality. It can be intimidating for relatively new people to see athletes burning through muscle ups, pushing 300-plus pounds overhead, slamming bars, and stomping and yelling. It’s an overwhelming environment for some, as these newcomers maybe haven’t even yet achieved their first pull up. If the competition athletes then blow by such people with barely a nod, the perception is set in stone.

It’s up to you as the box owner to make sure you are an equal-opportunity presence. The fastest way to lose clients is to show them that the only thing you’re interested in is the competition folks. The classes are your bread and butter. Do you really want to grow your business? Then I suggest nurturing those who attend general classes at a ratio of two-to-one over your competition clients.

Competition Athletes: Be Part of the Community

Un-circle those wagons. Keep in mind your box is full of people who have goals and aspirations, just like you. The only difference is theirs are not competition related. This doesn’t make them less than you. It only makes them unique from you.

A lot of people look up to you, but may be intimidated by you. It only takes one misunderstood nod to be written off as a snob. Don’t let it happen. Make yourself available to the class athletes. Get to know them, appreciate them, and offer yourself to them as a coach, mentor, and friend. No barriers. 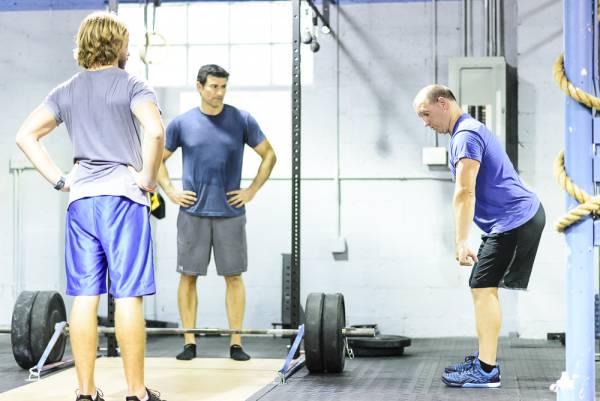 To the Athletes in the Group Classes

And take pride in what you do. You think that personal record board is only for top performers? You are wrong. If you PR your snatch at 100lbs, go write that proudly right under Franco’s 235 and own it. Post your results to the blog regardless of your score. The bragging rights are not just for top performers. They are for anyone who has achieved his or her goals.

A single pull up? Post it. That is huge.

Eleanor Roosevelt said, “No one can make you feel inferior without your consent.” Believe it.