The excitement of the CrossFit Open has passed and Thursday afternoons are once again just another run-of-the mill day. As the clock struck 5:00pm PST on March 31, CrossFitters around the world breathed a collective sigh of relief and fist-bumped their friends for completing five weeks of grueling workouts. Normally I would be celebrating with them, probably with a renewed desire to get under the squat bar to work on getting stronger, but thanks to a growing baby belly, this year I didn’t exactly complete the Open.

There are plenty of inspiring pregnant women who CrossFit into late pregnancy and I applaud and admire them for their dedication to the sport; however, as I have learned over the past few months, growing two humans inside of you is exhausting and standing on the sidelines (or heavily modifying the WOD) for this year’s Open was more my speed.

That being said, I learned a great deal about CrossFit while sitting this year out. Here are my three takeaways from observing and not participating in the Open:

1. CrossFit Is a Sport of Skill, Not Just Fitness

Watch the video of 14.5 and notice Rich Froning’s technique on his first thruster compared to his last thruster. His form never waivers and his efficiency is on-point. He’s a three-time consecutive CrossFit Games champion because his skills are impeccable.

Those who invest in bettering their technique will better their Open scores over previous years. Spend time putting extra effort into learning the Olympic lifts or gymnastic skills because that extra efficiency will get you a bit further each year. There is nothing wrong with adding extra interval training on the rowing machine to increase your general fitness, but working on your goats or heading into the box when the WOD includes your least favorite movement will likely provide more measurable improvement.

When I coach newbies on the Olympic lifts, they often get frustrated because the movements just don’t make sense yet. When this happens I compare learning the lifts to learning how to play the guitar. These things take time and effort. You aren’t going to learn to play a guitar like Eric Clapton overnight, and you won’t learn how to properly catch a barbell in the rock bottom of a squat in a month. Any new skill, whether it’s a snatch, a muscle-up, or obtaining proper depth in a squat takes patience and dedication.

Being pregnant, I find this to be especially true. My fitness is nowhere near where it was just a few months back, but my skills are still sharp and I rely on those skills to keep myself mobile and injury free. The bottom line: mastering skills first will make you a more efficient mover and the true fitness with follow.

2. “Gaming” The WOD Is For Serious Competitors Only

Step ups or box jumps? Oly shoes or Nanos? With so many tip videos and opinions popping up online after the Open workout announcements, who do you know who to trust when strategizing the workout?

I can’t tell you how many times during the Open I heard athletes talking about their plan of attack, but half way into the workout their plan went south and they entered survival mode. Hey, I’ll admit that strategizing is fun and I’ve fallen into the gaming trap in the past. I did step ups last year for one of the Open WODs because they were faster (I even timed myself a day before I completed the workout). And for serious athletes with a legitimate shot at going to regionals, I fully support strategizing and repeating workouts. But for me and the rest of the regular athletes competing in the Open, committing to the workout and putting your best effort forward will be more helpful that any tip or trick you see online. 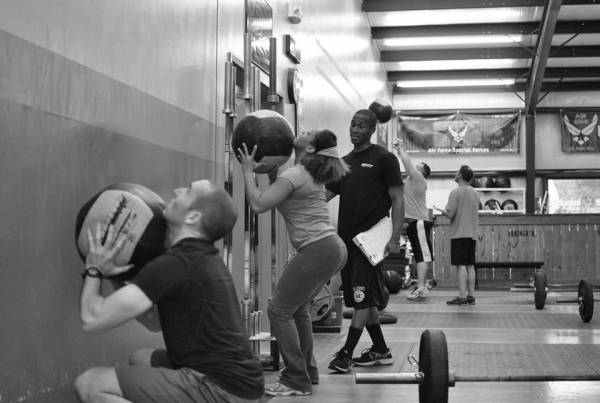 Just go for it and unless things really hit the fan (like if equipment breaks), only do the workout once. The Open has a special way of making people nervous about movements we do every day in the box, but don’t let the workout get in your head. Remember it’s just a workout and when you approach it with a fun and positive attitude, you’ll probably accomplish things you never allowed yourself to try in a regular, non-Open workout.

The catch-phrase of the 2014 Open was definitely bro-rep. When Danny Broflex came on to the scene, he prompted a symphony of bro-rep jokes in boxes everywhere.

Judging for the Open is not personal. It’s a job. When a judge fails to “no rep” an athlete they are essentially compromising the legitimacy of the sport. When technique breaks down (ahem, the infamous photo of Stacy Tovar in 14.3) it just gives fuel to the CrossFit haters, and I don’t know about you, but I get annoyed when I constantly have to defend the sport I love to my non-CrossFit friends.

Getting away with sloppy movement will never make you more fit. Hold yourself accountable and have respect for the movement. Your coaches put a lot of time and energy into teaching proper technique and there is nothing more satisfying for a coach than seeing an entire class making good choices during a WOD.

At my gym, each week coaches urged members to “no rep” a competitor when his or her movement failed to meet the prescribed requirements. By doing this, you are doing the athlete a huge favor by forcing them to uphold the highest of standards. Getting away with sloppy movement will never make you more fit. Do your friend a favor and “no rep” them. It’s called virtuosity, bro.

Did you participate in the Open this year? Whether the answer is yes or no, what did you learn from making that choice? Post your thoughts to the comments below.