More often than not when working with new athletes, I hear them talk about speed. They talk about wanting to be faster in their lifts, faster in their WODs, and faster to their goals. But the mantra that has repeatedly gotten me the best results is, as Coach Burgener says, “Slow is smooth, and smooth is fast.”

RELATED: Speed Is Power, But It’s Not Everything

With that in mind, I am going to highlight the principles of my four-week intro program. This will be what I would consider the “tip of the iceberg” in terms of my methods, theories, and philosophy of technique and programming. Anyone who knows me will agree that I could go from front cover to back simply discussing my squat talk, but I will leave that for another time.

“Olympic lifts are skills that take practice, patience, and time to develop. Slow down your movements in order to become smooth and balanced.”

4-Week Intro to the Principles of Vaughn Weightlifting

Rhythm and timing are essential to developing proficient Olympic lifts; however, faults and mistakes can overwhelm and delay the desired progress of any competitive or casual fitness enthusiast. I believe the initial breakdown and emphasis on four core principles can set a foundation that will ultimately lead to the smoothest and most successful path to optimizing anyone’s snatch, clean, and jerk.

Overhead stability, bar path, extension, and head movement are the principles that guide this initial program and lead towards all of the following variations and progressions by Vaughn Weightlifting.

When setting a foundation for the snatch, it is vital to ensure the optimal position of support overhead and in the overhead squat. This initial program emphasizes multiple drills and holds in the overhead position to reinforce the following themes for best stability. 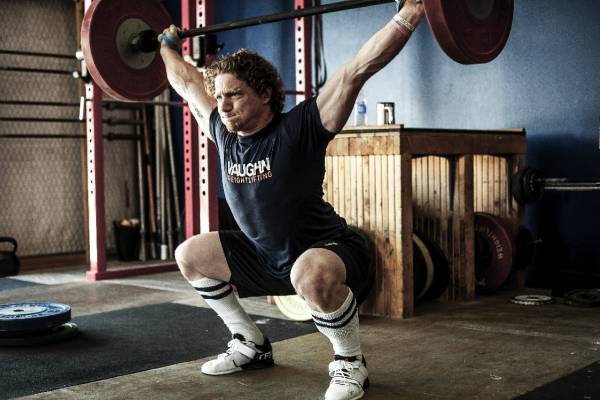 These themes are demonstrated in the picture above. A deliberate and consistent stacking of the wrist, elbow, and shoulder joints ensuring a stable and healthy support system that can transfer to the torso and hips. Notice the vertical nature of the torso, which allows for the weight to transfer straight down to the hips while keeping the bar over the lifter’s midline and base of support. Drills in the intro program will be focused on setting this position and strengthening it through isolated exercises.

RELATED: In Over Your Head: Pro Advice for a Better Overhead Squat

The debate and talk of bar path could encompass an entire magazine, so I will strive to be concise in what I have found to be the most efficient and consistent way to move the body and bar during the snatch and clean pulls. My goal is simple. I want to limit the distance the weight is traveling. Consequently, the most vertical line and path overhead is my route.

“I believe the initial breakdown and emphasis on four core principles can set a foundation that will ultimately lead to the smoothest and most successful path to optimizing anyone’s snatch, clean, and jerk.”

In order to accomplish this path, lift-offs (partial deadlift to above the knee) and snatch/clean deadlifts are seen repeatedly in the accompanying program. These auxiliary lifts are essential in building the first pull and strengthening the necessary muscle groups to tell your bar where to move. Most lifts are made or missed before the bar ever reaches our knees, so take note of the amount of emphasis on the first pull within the program. 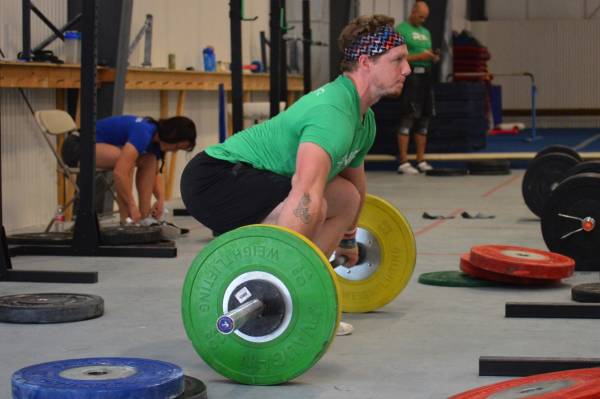 I won’t get too controversial here and throw out the common terms like “catapult” and “triple extension.” What I will say is that, in order to optimize our bodies potential to put max weights overhead, the body needs to use every inch of extension to cause an aggressive reaction in change of direction under the barbell. Too often I see an emphasis being put on getting under the bar quickly.

Is that my goal? Yes, of course it is! However, I want this speed to be a reaction resulting from great body positions. Cuing yourself and other athletes too early for a quick pull under often results in poor timing and missed lifts. Working from the high hang, or hip position, will reinforce the smooth extension and reactionary speed that I believe results from slowing down position work and being deliberate. 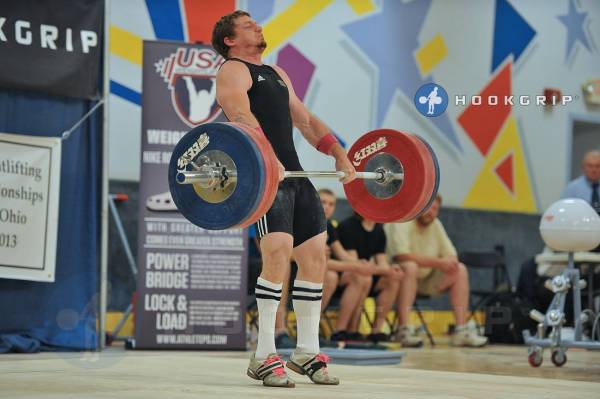 The final core principle I want to emphasize in this intro program is the head movement during the shoulder to overhead or jerk. With bar path and efficiency being an aforementioned principle, I want to expand that specifically to the jerk. In order for the bar to move in the straightest, smoothest, and quickest path overhead, I believe the chin and head need to extend back to full range and get out of the bar’s way. Think Pez dispenser if you’re having trouble visualizing.

To reinforce this principle and put it to practice, there will be isolation drills during the dip and drive phase of the jerk. Try lifting that chin to help with your power and path, my friends. I think you’ll like it. But keep in mind, this alternative method is specific to lower-rep and max-effort jerks – not the snatch, clean, or standard metcon shoulder-to-overhead movements where a neutral head will still be your best cue.

Slow Is Smooth Is Fast

This four-week program may seem a bit segmented, isolated, or even slow in progressing, but I want you to keep in mind the core principles I am trying to establish and make concrete.

Olympic lifts are skills that take practice, patience, and time to develop. Slow down your movements in order to become smooth and balanced. Once this smooth and ease of movement becomes natural, the aggression and speed that we all desire in the lifts will become as natural of a reaction as breathing.

Chad Vaughn is a two-time Olympian, nine-time National Champion, multi-time international medalist, and an American record holder in the sport of Olympic-style weightlifting.

Along with competing, Chad owns CrossFit CenTex and has coached within the CrossFit community for the last four years through weightlifting classes and seminars around the world. Chad leads the CrossFit Weightlifting Advanced Trainer Course and developed the Vaughn Weightlifting line of equipment in partnership with FringeSport. Current projects also include working as the resident weightlifting coach for The Training Plan.