Paleo is catching on like wildfire these days, and what strikes me as particularly interesting is the array of different applications that have come to light, from reversing diabetes to fueling performance. So what is this paleo diet, anyway? Heidi L. George provides a solid definition in her article, What’s the Best Diet? Raw, Vegan, Vegetarian, or Paleo?

The main idea behind this diet is that you eat foods in their most natural state, such as meat, eggs, vegetables, tubers, berries, fruits, nuts, seeds and healthy fats (cold-pressed coconut oil and ghee). You avoid eating dairy, legumes, all grains, and processed foods because nature does not provide these foods in a way that is easily attainable to eat.

A lot of people complain that paleo is too restrictive. No dairy, no legumes, and no grains – so what can you actually eat? And why would you follow a diet with such perceived limitations?

I detailed some of my family’s own experience transitioning to paleo in my article Goodbye Cheerios, Hello Chicken: One Family’s Attempt at Paleo Eating. Since our transition, my daughter’s asthma and eczema have all but disappeared (she was using an inhaler daily before the switch). My husband and I have also noticed huge improvements in energy and overall health. There are countless similar stories out there about individuals whose lives have literally been changed by adopting this way of eating.

While there was no difference in total satiety between the diets, the paleo diet was more satiating per calorie. That means the paleo eaters ate fewer calories per meal on average, but were just as satisfied as those on the traditional diabetes diet. In follow up questionnaires, people in the paleo group were also more likely to report weight loss, and there was a trend toward reports of higher control over blood sugar.

Doug also wrote on another study, which examined the results of a ketogenic diet that also the paleo template, in his article, Is Paleo Ketogenic and Is That a Good Idea? This particular diet resulted in impressive weight loss results with no detrimental effects. Of course, that’s not totally surprising when you take into account the satiety results from the study we just discussed. Here’s what happened to the people in the ketogenic diet study:

In a study published in Nutrition & Metabolism, researchers looked at just over 19,000 people on a protein and micronutrient (vitamins and minerals) only diet – an extreme ketogenic diet. Weight loss was the major result. In fact, after 25 days on this diet, those studied lost an average of 22 lbs., mostly fat and water. In this study, no detrimental effects were noted.

But beyond general health, how can paleo help athletes? The answer has been put into book form by Loren Cordain and Joe Friel, but coach Keith Norris sums it up well in his article, The Paleo Mystique: Deciphering “Paleo” Eating. Keith notes, “Our bodies were built to withstand rigorous daily physical demands, fueled by the consumption of animal proteins and fat, vegetables and tubers, and scant amounts of nuts, seeds, and fruit.”

Aside from sustaining the daily activities of our ancestors – which, let’s face it, were probably quite different form the daily habits of your average elite athete – paleo can help athletes by shifting the body’s ability to burn fat and manage blood sugar. Keith explains:

Looking beyond health, for a performance edge? Yeah, paleo is for you, too. Endurance capabilities are greatly enhanced by maintaining the body as a fat-burning V-8 engine rather than a sugar-burning sewing machine. Once this enzymatic shift is made, “bonking” – the low-blood-sugar-event scourge of all endurance athletics – is a thing of the past. Performance nutrition is all about maximizing nutrient density per calorie ingested, and no diet exceeds in providing that all-important ratio like paleo. 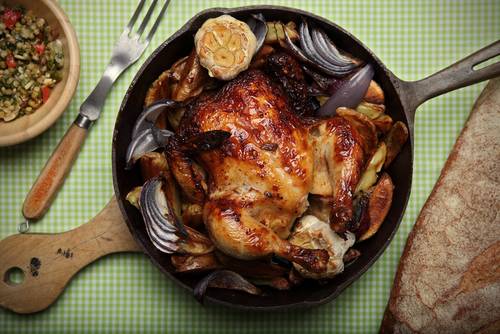 Of course, eliminating the most prominent portions of the Food Pyramid is bound to be controversial, and there are plenty of people out there who enjoy debunking the paleo paradigm. Here are two misconceptions that are especially important to consider:

1. It’s Not About Being a Caveman

Paleo is not the Renaissance faire of nutrition. Yes, the framework is deeply influenced by examining the diets of our ancestors, but its application takes place in a modern times. In his article Grok Didn’t Eat Oatmeal and Other “Directionally Accurate” Paleo Myths, Keith Norris discusses how paleo can be applied in the real world:

Historical re-enactment has never been the point of the Paleo or ancestral lifestyle. Paleo is about making the best, most nutrient-dense, and least problematic food choices in the here-and-now.

There’s a big difference between eating a paleo diet rich in meat, fat, and vegetables and just eating foods that are labeled paleo. The most obvious example is sugar. As Vanessa Bennington pointed out in her article, Why Natural Sugars Aren’t Any Better Than Artificial Sugars (and Neither Is Paleo!):

Men should only be getting around 36 grams and women about 24 grams of sugar total per day. Track your food one day and then wonder just how in the heck you managed to eat that much sugar! Enjoy your treats but make sure they are treats and not everyday indulgences. Your body will thank you.

This intentional, common sense attitude toward food doesn’t just apply to sugar. When I attended Paleo f(x) this year it became clear that this is a flexible, adaptable movement seeking optimal health and wellness, not just a restrictive diet based on ideas about what cavemen used to eat. Paleo is about re-kindling the strategic aspect of eating in order to optimize health and performance, both on the field and in everyday life. It may be an ancestral model, but it’s no less applicable to our modern context.