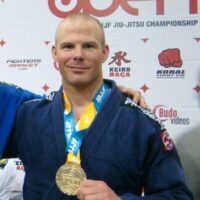 James Kearns is a Brazilian jiu jitsu competitor and former United States Marine who began training martial arts in 2005. Starting in Taekwondo and boxing in his hometown of Chambersburg, Pennsylvania, he would eventually begin training and competing in mixed martial arts. This is when James first started to train in no-gi jiu jitsu. Then, two and a half years ago, he reluctantly borrowed a gi and tried the Brazilian jiu jitsu class. James has trained in no other martial art since.

After successfully competing at the rank of blue belt for the last two years, earning six gold medals in IBJJF events and finishing the year with a gold medal in the Abu Dhabi Pro Trials adult division, James earned his purple belt in December 2013. Having set his goals high for 2014, he plans on competing six to eight times this year, including the IBJJF Masters World Championships.

Along with being an active BJJ competitor, James also trains and competes in Olympic weightlifting. Having a passion for the health and fitness industry, James is a certified personal trainer and the strength and conditioning coach at Tactical Combat Academy in Greencastle, Pennsylvania, where he focuses on individual and group program design for combat sport athletes. James is also a full time student, working on his B.S. in Sports Management.

Although training in Brazilian jiu jitsu and Olympic weightlifting, being a strength coach, and being in school keep James pretty busy, he still spends most of his time with his wife and four kids (who keep him even busier).