CrossFitters Shouldn’t Do Isabel (And Other Blasphemies)

I challenge every box reading this to program workouts for one month without high-rep Olympic lifts or touch-and-go deadlifts. There are so many workout options not being utilized. 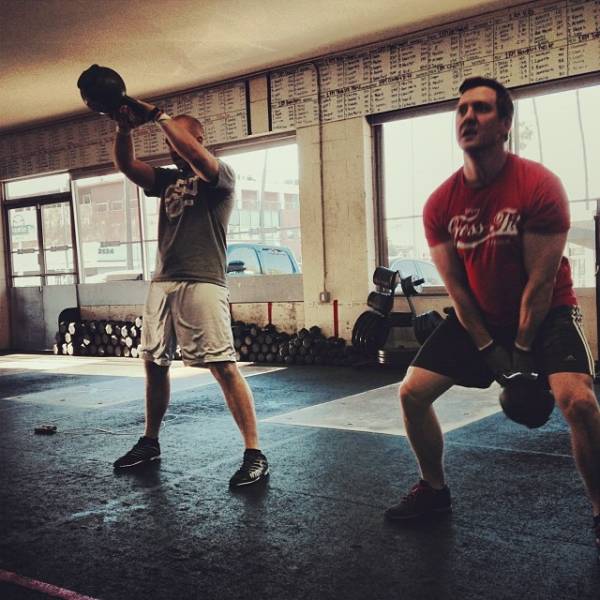 One thing we have all found in trying to have this discussion is that the more anyone tries to lay down a broad brush CrossFit-is-dangerous stroke, the more the community at large, lead by CrossFit headquarters (CFHQ), builds the Floydian wall.

As CrossFit gains in recognition and popularity, the more it gets criticized, and the more CFHQ needs to bang the safety drum (or the more they just tell any detractors to get bent).

We’ve been talking in circles for years now. The arguments are the same: You can’t prove kipping injures shoulders. You can’t prove high-rep Olympic lifts are dangerous.

The rate of injury doing “X” is much higher than CrossFit, and CrossFit beats the hell out of sitting on the couch. Fifty-seven people have died running marathons – when are you going to blog about that? Argument and defensiveness, ad nauseum.

One thing I don’t hear much of, at least from the loudest voices in the CrossFit media world, is talk about safety and injury prevention.

Sure, there is a lot of talk about scaling, but that is not the same thing. Google “CrossFit safety” and tell me what you find. Not much. (You’re welcome, CrossFit Safety Harbor.)

Putting the “Fit” Back in “CrossFit”

I would hope that rule number one in getting fitter would be “don’t get injured.”

Being injured is the exact opposite of getting fit. I would hope that CrossFit, Inc.’s position is the same. With the emergence of CrossFit as a sport, we sometimes forget this particular fitness program is not for the sport-seeking athletes.

It’s for the everyman, who comes to his or her local CrossFit box just wanting to get into better shape and move, feel, eat, and live better. The sport is an afterthought.

I would wager that the vast majority of people who do the CrossFit Games Open are doing it just for fun, not to compete, and the remainder of the millions of CrossFitters who don’t sign up for the Open couldn’t care less about the Games.

With that thought in mind, maybe it’s time for a new discussion. I call this goals-based risk exposure. What this means is that CrossFit can be safe, relative to your goals.

If you follow the Function track, you aren’t concerned about the Open. In this track, you will rarely see things like high-rep Olympic lifts or kipping pull ups, and you will never see a box jump prescribed that involves anything other than stepping down. 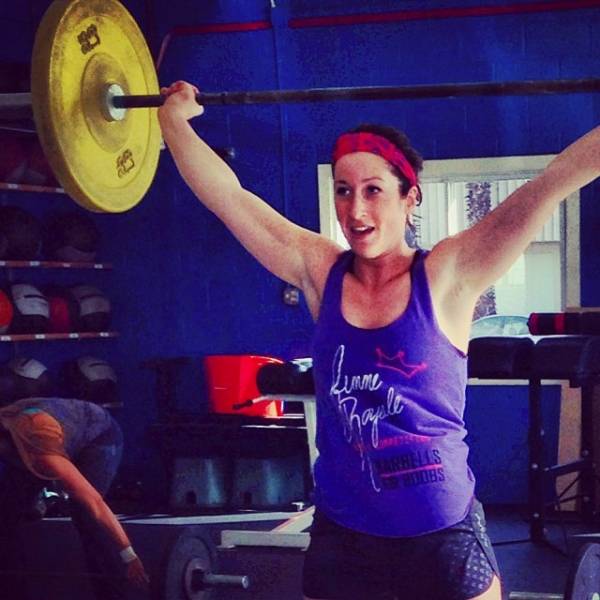 Many CrossFit boxes around the country are beginning to incorporate tiered systems and creating programs that focus on strength and conditioning in a fitness-oriented manner.

My own box, Cincinnati Strength and Conditioning (which also houses CrossFit Steel Place) has several tracks. The basic classes are fitness-based and the participants rarely, if ever, do high-rep Olympic lifts. They never bound off box jumps.

And Girls and Heroes are simply not programmed. We do one hero workout per year, Murph, on Memorial Day. The focus is fitness, and I can tell you, the injury rate is exceedingly low.

In gyms like ours, once clients decide they’d like to move up into the competitor tier, they move to competition programming or individualized programming that takes them out of the classes and into the open-gym environment.

In their new workouts they train with a more advanced, competition-focused approach. Here, they will do much more of the movements like multi-rep snatches, bounding box jumps, kipping pull ups, and butterfly pull ups.

For the average CrossFitter, there is no reason. Now, I know that may sound like total blasphemy, but hear me out.

There are dozens of movements that can be done at high intensity that will help you to achieve your fitness goals – maybe more than a hundred – and that have less possibility of injury.

“Isabel” is thirty reps of power snatches at 135lbs for men, 95lbs for women. The goal is to get as fast a time as possible. This means you are executing thirty highly technical lifts at a relatively heavy weight as quickly as you possibly can.

Here’s what happens when you rep out thirty heavy snatches quickly: your form starts to degrade. That is not up for debate. By about the tenth rep, you are starting to fatigue and your muscles are beginning to build up lactic acid.

The result is form breakdown. Once you are fatigued, you are no longer thinking about getting tight for each rep, rotating your elbows in, keeping shoulders over the bar, or pushing the platform away. You are thinking about ripping the bar off the ground and getting it overhead.

So why do Isabel? This workout – as well as “Randy,” “Grace,” and any other single-movement Olympic lift workout – is nothing more than a conditioning workout.

It’s a metcon. This is not a strength workout. I suggest you can achieve the same ballistic, hip-opening, lung-crushing style of workout without crushing your back in the process. For example:

While appearing to be different on the surface, these movements actually contain a lot of the same components as Isabel: ballistic hip opening, explosive jumping, a tiny bit of pushing but not much. What this workout is really all about is lungs.

And I assure you, you can tax the same energy pathways as are being hit by the snatches with something like kettlebell swings. 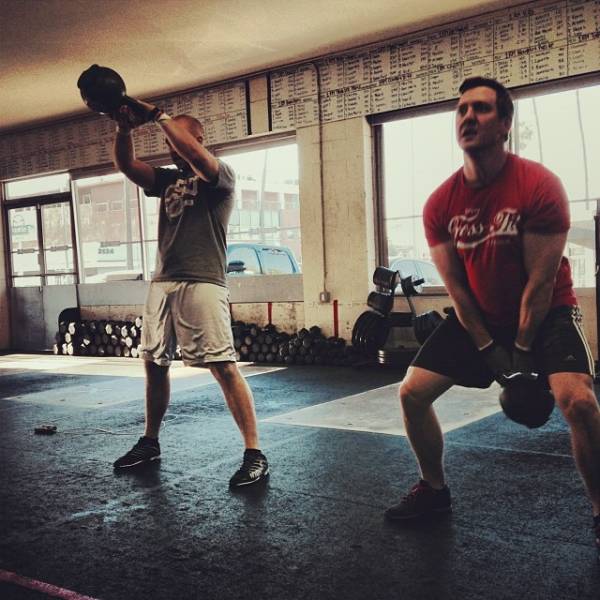 A kettlebell swing at the proper weight, even a Russian-style swing, can provide you with the same hip hinging explosiveness as a power snatch, but it’s a much less technically involved move. (Before you send your cards and letters, all you RKC folks, I am not suggesting kettlebell swings are rudimentary, merely that there are fewer moving parts).

The kettlebell never has to touch the ground, resulting in less opportunity to go butt-high and expose your lower back to a rounded and soft start.

There is no jumping and landing. There is no internal to external rotation required. Bottom line: it’s not a snatch and you’re still doing CrossFit. Miracle!

Now, once you’re a competitor, all bets are off. If you compete in CrossFit, you’re not interested in fitness. You’re interested in winning. Those are two different things.

You accept the risk of injury if you choose to compete. So go at “Isabel” as hard as you can, grip it and rip it, and good luck in the competition this weekend.

But if you are one of the millions of CrossFitters who don’t care at all about competition, but just want to get fit and live a healthier life, then continue doing CrossFit.

But do it at a box that understand the concepts of fitness versus competition and training versus testing. One that has understands “Randy” and “Isabel” don’t belong in their programming for fitness-focused classes.

Some Recommendations for Boxes

Am I really suggesting CrossFit boxes eliminate all of these cornerstone elements from workouts? It’s certainly worth looking into, but what I am actually suggesting is that CrossFit is primarily about fitness, that fitness is about staying uninjured, and that proceeding with the safest possible programming plan is by all means worth reviewing.

I recommend boxes get creative. Think about the goals-versus-risk aspect of movements. 75 snatches at 75lbs? With all due respect to Randy Simmons, this workout is foolish. Leave it for the competition.

Why not program three rounds for time of twenty wall ball, twenty burpees, and ten strict pull ups? What’s the difference, you may ask? Exactly.

Diane? 21-15-9 deadlifts at 225lbs and handstand push ups? Leave that for the competitors. How about 14-10-6 walking lunges with a 70lb kettlebell in each hand, some appropriate progression of push ups, and box jumps with a mandatory step down?

Lots of options exist of which many CrossFit boxes are not taking advantage.

Not to mention the Airdyne and the rower. So many options that make simply programming “Helen,” “Badger,” or some other named workout unnecessary.

I challenge every box reading this to program workouts for one month without high-rep Olympic lifts or touch-and-go deadlifts. Get creative and see how it goes.