If you’re an aspiring law enforcement officer or have your eyes on the military, then you’re no doubt starting to wonder about how to pass those tests. While many will argue that push ups have little bearing on combat readiness, the fact is they are always tested.

First, You Need to Be Able to Do Push Ups

If you’ve gotten to the point of signing up or maybe are even partly through the recruitment process, you can hopefully do some push ups. This isn’t a how-to-do-push-ups primer. This is a how to pass the physical fitness standards tests.

If you are an absolute beginner, I suggest buying a book like Convict Conditioning, which has a great series of progressions to get you from zero push ups to doing them competently. But depending on which branch you aim to enter, you may still need quite a few more reps than the plans within that book will build you to.

The first thing we’re going to do is cut out nearly all of the push ups from your training sessions. You’ll still do some, and you’ll do variations of push ups, but within your actual training sessions, we’re going to try to limit how many you do. That’s because you’re going to be doing them almost constantly during the day outside of training so we can focus on other things during training.

The first thing to understand is that you need some maximal strength increases as that will help you pump out more reps. But the second thing is that there are better ways of adding reps to your total than trying to add weight to your push ups.

“When the test involves high degrees of muscular endurance, it actually makes more sense to attack the pressing muscles once everything else is already fatigued.”

Adding weight to your push up means that at best you wear a weight vest, which can be helpful (but means you need to own a vest). At worst, it means you have someone try to balance a plate on you while you do push ups. I’d rather you do exercises that can be done with little to no equipment, that don’t need a partner, and are safe.

Start at the Back of the Program

We also need exercises that work the same muscles and reinforce patterns needed need for high-rep push ups. So, taking a cue from Ian King, we’re going to start with the back of our program and work forward. What do I mean by that?

Normally when you create a program, you start with the hardest exercise and move to easier versions as you fatigue. For maximal strength that works well, but when the test involves high degrees of muscular endurance, it actually makes more sense to attack the pressing muscles once everything else is already fatigued. (And don’t stress about your reps dropping, as the second half of this program has plenty of high-rep push up work).

For the handstand push ups, begin with a block so you are doing half-reps instead of full head-to-ground reps. You can use a foam roller, medicine ball, yoga block, or anything that shortens the range enough to allow you to get at least five reps. 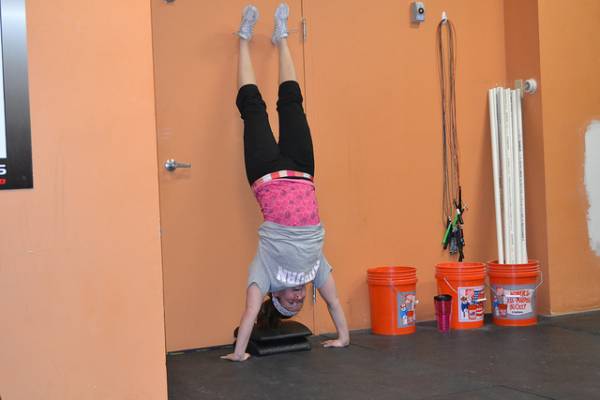 As you get stronger use a smaller and smaller block, until you are working full range. And don’t worry at this point about building the hands up off the ground, as the goal here isn’t to become great at handstand push ups, but to assist our regular push up training.

Follow this routine twice per week. On your other training days, add in a heavy upper-body pulling workout to even things out. The volume of pushing in this plan is heavy, so you’ll need some pulling to keep your shoulders healthy. Avoid extra pull up work on this day and stick to scapular retraction work such as rows and even partial deadlifts.

But here’s the magic of the plan – you’re going to do push ups every hour, every day. This is what is commonly called greasing the groove (GTG). This approach relies on motor learning enabling you to quickly become better at a task. The goal is never to work to failure, or even close to it, and to have frequent exposure to the task daily.

When I do GTG work, I set an alarm for every hour and just drop down and do my push ups wherever I am. This has led to some weirdness in the past, so these days I tend not to be so obsessive about it. If I miss one or two sessions because I’m at the movies, I just accept it and move on.

“This approach relies on motor learning enabling you to quickly become better at a task. The goal is never to work to failure, or even close to it, and to have frequent exposure to the task daily.”

Multiple Sets During the Day

Begin by doing an all out set of push ups and record your number. Let’s imagine that your goal is fifty push ups for your test, and you’re currently at thirty. If you can do a set of thirty, then you can easily manage multiple sets of twenty during the day without making yourself sore or too fatigued. To calculate your own number just take seventy percent of your maximum and use that. (And yes, I know that seventy percent of thirty is 21, but it’s not a nice round number).

Every two to three days, add a rep. So, if you started at twenty, on day three you’d start doing 21. On day five or six, you’d do 22, and so on. If you reverse the formula, to get a total of fifty reps for your test, then you’d need to be doing multiple sets of 35 during the day. If you add a rep every two days that means within a month you’ll be able to hit your test score. 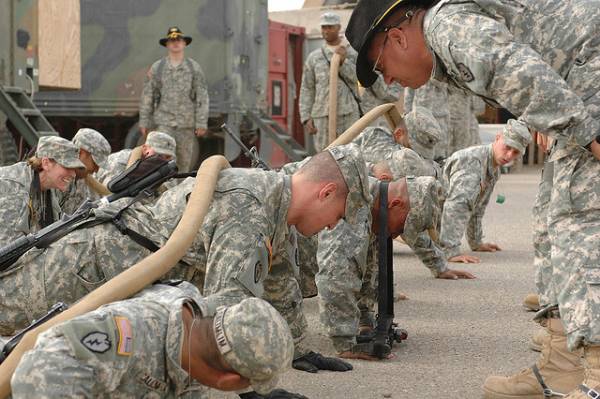 The added bonus of this is that you’re also teaching yourself to be able to perform many, many sets of push ups daily. That is going to come in handy later on during your academy or boot camp course when you get dropped because you or your team screwed up and get punished. At a minimum, these punishments will be doled out in sets of at least twenty push ups, so having some extra gas in the tank will be extremely handy.

RELATED: Basic Training Breakdown: What to Expect When You Join the Military

The added strength and muscular endurance from the training plan will go a long way towards helping you, too. Just be sure to add extra pulling and shoulder prehab training in to keep your shoulders healthy. The benefit with the plan is that for most people they’ll be able to hit their target within a month just by using more targeted training and diligent daily practice.