Recently I had a chance to attend a local CrossFit competition. I’m sure, as with most things, the scale of events in Australia is smaller than it is in the United States, but this event was considered to be a tier below CrossFit Games regionals in terms of the caliber of competitors. It also even featured a few athletes such as Chad McKay, Rob Forte, and Ruth Horrell who compete prominently on the world stage. Chad was actually attending almost straight off a plane after competing in the World Games the weekend before.

All jokes aside, I was blown away by how many people were in attendance, with better crowd numbers than I have seen at many national level martial arts tournaments. One of the main reasons behind that, in my mind, is that unlike in martial arts where people are separated by rank it is as likely for a CrossFit competitor to be working out alongside a local superstar as an absolute beginner. In addition, it was clear even when first walking into the event that all the competitors had not just some friends and close family there, but also support from other members of their box.

I’m going to get the negative observation out of the way first. There’s just no tactful way to say this, but I haven’t seen so much obvious steroid use since I worked out at a big powerlifting gym where guys used to head butt each other to psych up for squats. While I was watching the events with a friend of mine, who is a high-level coach in aspects needed to be good at CrossFit competition, he remarked to me how open people were about the steroid use and how widespread it was. His actual comment was, “Why do you think these guys don’t compete in weightlifting? Because they test.”

I’m not actually against drugs in sport, so it doesn’t bother me. As soon as you offer money for any kind of event, then cheating in all forms begins. That’s human nature and goes back to the Greeks eating bull testicles in the belief that it made you stronger. But, I do think there is a disconnect between what is otherwise a clean sport that gets people off the couch and eating well and what is clearly happening at the events. Given it’s throughout all sport I’m not sure there is a solution to it, but I do know that sticking your head in the sand and hoping it goes away, or that people can’t figure it out, doesn’t help.

But enough of that, and on to the good stuff.

CrossFit has a terrible reputation for allowing poor form. It’s not helped by renaming exercises like the snatch to “floor to overhead anyhow,” or changing the push press or jerk to “shoulders to overhead.” My belief is that leaving things open to interpretation with little clear distinction allows a lot of leeway for bad things to happen. But at this event I didn’t witness anything that was either dangerous or poorly done, with the exception of the double kettlebell snatches I saw that mostly made me wince. That being said, the top guys at this event did the movement as well as you could ever expect anyone to do them. 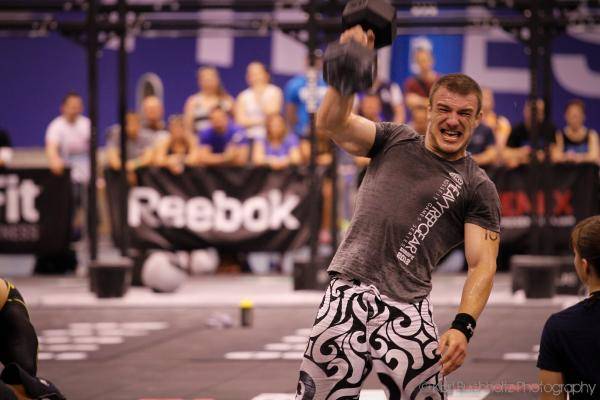 Speaking with some friends about the day was eye opening, too. One of them is a CrossFit competitor and the other is working on getting to that level. My competitor friend is no dummy. Dian Parry is a 33-year-old osteopath who runs his own clinic called Hampton Street Osteopathy. I had assumed that everyone who competed in CrossFit came to it with the eventual goal of getting to the regional or world level. But Dian told me that wasn’t his goal and that competing allowed him to focus his training on an event, similar to others who may choose a marathon or triathlon as their focus.

Because this was a high-level competition they had qualifying marks for athletes wishing to enter. Dian’s numbers are pretty good, and you’d struggle to find many members of commercial gyms who could match them. Weighing 86kg, he has a snatch/clean and jerk of 95/115kg and he has a back squat of 185kg. While that may not sound like much to those who compete in weightlifting, those numbers are pretty solid and it shows the level many are able to get to with dedicated training and some serious work.

My other friend is an ex-national Taekwondo team member, Kristy Sparre. She’s incredibly athletic and explosive, as you’d expect from someone with that background, but hasn’t yet mastered many of the gymnastic elements in CrossFit such as muscle ups that she would have needed for this competition. However, neither Kristy nor Dian were there to try to win. They were there to compete for the thrill of competition and the focus it gives their training.

Speaking quickly with world-class CrossFitter Chad McKay was quite a different experience. He was obviously there for to compete at the pointy end of the field. One of the reasons I believe triathlon has been the fastest growing sport in the world has to do with age-group racing. There’s no other sport where you can be on the course with the top professionals like you can in triathlon. Well, Dian got the chance to compete on the same “circuit” as both Chad McKay and Rob Forte, who are the best in Australia, and that is a big reason why CrossFit competitions are so well attended in my opinion.

With some CrossFit events even offering “Rxd” and “scaled” divisions, there is a lot of scope for novices to test the waters with their toes, as well as for more experienced trainees, as well as absolute beasts like the guys you see at the Games. That will help to make CrossFit even more popular than it already is. 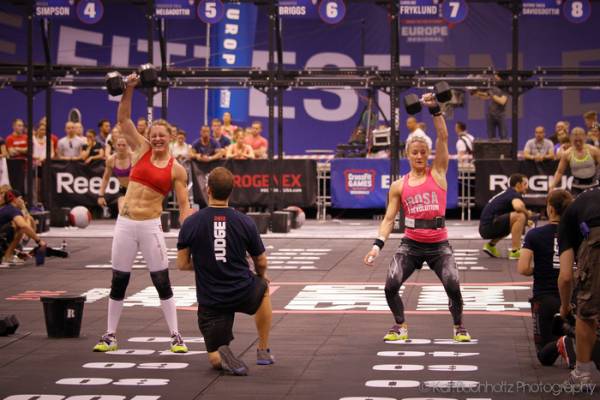 Whether that popularity is a good thing or not remains to be seen. I know there are many in the CrossFit community who don’t like the competition aspect of it, or even necessarily the timed aspect of workouts done just within boxes. They feel it makes the use of CrossFit for what it should be – developing a broad base of GPP – difficult, as people are only focused on the competitive aspect of it. Having watched what happened to Taekwondo and judo when they became pure sports and gained Olympic status, I know a lot of good techniques suddenly got ignored in training just because people were worried about how to score points.

Overall, I can honestly say I had a great time at the event. I am a fan of exercise and nearly all sports at some level, and it was a blast watching people put in big efforts and seeing them supported by friends and family. Anything that gets people off the couch is ultimately a good thing and should be applauded for making a difference in the world’s health.