Take some time to see how training methods and philosophies play out over time, but always plan to reevaluate again and again.

He was my mentor and friend, Bill Gillespie, who I worked for as a college strength and conditioning coach and trained under as a powerlifter. At almost sixty years old, he just bench pressed 414kilos/914.9 in a multi-ply bench shirt.

I know equipped powerlifting isn’t as cool anymore with the kids, but holding this kind of weight over his body and pressing it off, at this age, is an incredible accomplishment. No one can write off this feat when you see the decade behind the one brief moment highlighted on Instagram.

I was there for that decade before all this. When I met Bill, he had somewhat recently benched over 800 pounds in a sanctioned competition. He was fifty years old. Shortly after I started interning for him as a strength coach, he attempted something in the mid 800s during a meet and missed. He tried it in the competition after that, and he missed it again.

Coach Bill eventually hired me full-time as an assistant, and I saw this pattern repeat for a while. The coach would still compete, train as hard as ever, and lift otherworldly numbers by any outsider’s perspective.

At one point, he decided to lose weight, get more fit, and compete at a lower weight class. He wanted to see what he could do. Still, he lifted weights most people couldn’t imagine, but I knew they were weights he had done before, and although he loved the practice, deep down, he didn’t want to do what he had already done.

When I left my position as a college strength and conditioning coach in 2014, Coach Bill looked as if he had lost strength, he would never regain. He’d taken a downward trajectory, but no one could fault the man. He was entering his late 50s.

Coach Gillespie had pushed his mind, body, and spirit for decades upon decades. He had too many injuries to count and a bone spur in his shoulder that would rub the muscle and soft tissue so aggressively that his shoulder would almost dislocate.

In my mind, he had done his great work, and now he could rest if he so chose. We talk from time to time, but regrettably, it wasn’t often. I knew he wouldn’t stop lifting, but for some reason in my mind, he wouldn’t be training like he did previously.

Then one day, I saw a post from him on FaceBook. It was from his training, and he was bench pressing weight in the mid to high 800s. I sat there with my mouth gaping wide open, unable to believe what I just saw. Here he was, close to age sixty, training with weights more substantial than his best in competition almost ten years earlier.

And then, yesterday, I saw the competition lift and filled with pride, I immediately texted him. Bill had more work to do. He told me a couple of the things he’s changed in his training and philosophies and wanted to know what I had developed since our time together.

Go Back to the Start

Life is strange. I had just recently been looking at old training logs from my time with Bill when I saw what he did. I find myself doing this two to three times a year. It’s usually impulsive because of some burning desire to work out some programming and training questions in my head. I’ll set aside some time and go into the void. I search through old training logs and past training cycles that I’ve written for teams and lifters. 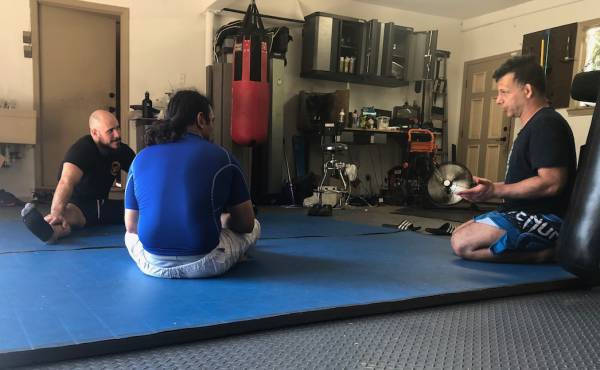 This particular time was no different, something sparked an idea, and it led me to search for a way to bridge old ideas that I knew worked to my current system. But, I hadn’t figured out how to integrate them into my guidelines ondesigning:

I used to do this much more, but as I settled into a working system to guide my process in creating programs, I’ve done it less and less. I remember a time where I’d sit at my dining room table at night after work with a glass of something good and my laptop. I’d sit happily in the dimly lit room with training logs and books, searching for some source code.

I am finding ways to take what I’ve learned and what I’ve practiced and what I’ve observed from coaching and make it into a cohesive workable system. I enjoy the process, and I find it to be creative and stimulating.

Training is difficult to navigate, especially when guiding others. The paradox is that everything works for some time but nothing forever. Everyone learns this in time. So you dispense with ideas and methods as you go along.

But if you keep practicing, keep educating, and most importantly keep up with your real experience coaching all types of people, you perceive more, and you stop being someone who excuses ideas. But then more wisdom is needed.

So you investigate which ideas you may have prematurely excused that have lasting value if, and only if, they’re reused or re-introduced correctly as an athlete develops. These ideas may have stopped working for a time but are still valuable if they are worked back in again slightly differently in the more mature athlete.

Figuring out what factors allow for a training method to be used again after it may have begun to impede progress when the lifter was less developed requires a lot of focus and study. It requires studying:

Not everything can be used again, and some of it shouldn’t have been used in the first place, even if it did work for a while. Finding this won’t be easy. A plan is needed.

Not only do you need to have had enough time of persistent effort in working through your systems of training, but you also need to have a strategy for comparison.

First, you need to make sure to keep actual written or digital records of what you’ve done, or if you’re a coach, what you’re athletes have done. I’ll be the first to admit my documents for my training were never great, even when I was at my most competitive.

Days and weeks are missing in my files, and others logged incorrectly. There are entire training cycles that I don’t have because my coach wrote them for me, and I kept them in a binder that I lost.

But still, I have enough training logs to see how long I kept with specific methods and philosophies and to see how I altered things and how drastically I did. Keep something to refer to, however incomplete.

Second, once you have a history rich enough to look back on, you should periodically compare what you were doing, ideally years ago, to what you are doing now. You need to set a reminder on your calendar for no sooner than six months – because really how much could you have gained in this time. Information comes fast, but knowledge arrives slowly.

But set aside this time to compare what’s working now and what used to work. The more significant the gap in comparison, the more I usually learn from it. See if you can figure out if you stopped doing certain things just because you thought you needed a change, or you did need a change.

Last, keep notes while you introduce old ideas, methods, and altered philosophies into your current training. Don’t only test the ideas out; take notes on what’s happening. Compare not only the results in performance to what you were doing before you introduced the old concept but also progress check-ins on how you or your athletes feel from to day and week to week so you can estimate the longevity of a training protocol like this over time.

Take some time to see how training methods and philosophies play out over time, but always plan to reevaluate again and again. Training progress is often not linear at all. It takes twists and turns. Just take it from my dear friend, Bill Gillespie.

If you need some help reevaluating what you’re doing, I want to offer you some advice. If you’re in the NYC area, check out our gym JDI Barbell. If you live in NYC, but JDI is too far for you to train regularly, check out our compound memberships. And if you’re not in NYC, check out our remote coaching and programming options.