The ABCs of Vitamins: Vitamin B1 (Thiamine)

Vitamin B1, also known as thiamine, plays a large role in maintaining healthy skin, hair, eyes, and liver. It can also cause some strange diseases if you don’t get enough of it.

This week, in part two of my series on the ins and outs of vitamins, I will be looking at the stress-fighting superstar known as vitamin B1.

What Does Vitamin B1 (Thiamine) Do?

Vitamin B1, also known as thiamine, is the first of eight B vitamins. Like all other B vitamins, vitamin B1 is water-soluble. Being water soluble means that the body doesn’t store it and depletion can occur quite rapidly. Vitamin B1 forms part of what is known as the B-complex vitamins and, like its partners in the complex, it helps convert carbohydrates into glucose and also metabolize fats and proteins into additional energy sources.

B-complex vitamins are needed for healthy skin, hair, eyes, and liver. They also help the nervous system function properly, and are needed for good brain function. Thiamine is sometimes called an “anti-stress” vitamin because it may help strengthen the body’s immune system and improve the body’s ability to deal with stressful conditions.

Vitamin B1 is found in both plants and animal products. Your body uses it to form adenosine triphosphate or ATP, which every cell of the body uses for energy. Thiamine is also converted into TPP (thiamine pyrophosphate), which is needed by several important enzymes to function. TPP interacts with an enzyme called transketolase. Transketolase helps manufacture DNA and RNA, needed for many metabolic processes and for the production of new cells. Normal functioning of nerves and muscles including the muscles of the heart is also dependant on a sufficient supply of vitamin B1.

Foods Rich in Vitamin B1

Most foods contain small amounts of thiamine. Large amounts can be found in pork and organ meats. Other good dietary sources of thiamine include whole-grain or enriched cereals and rice, legumes, wheat germ, bran, brewer’s yeast, and blackstrap molasses. 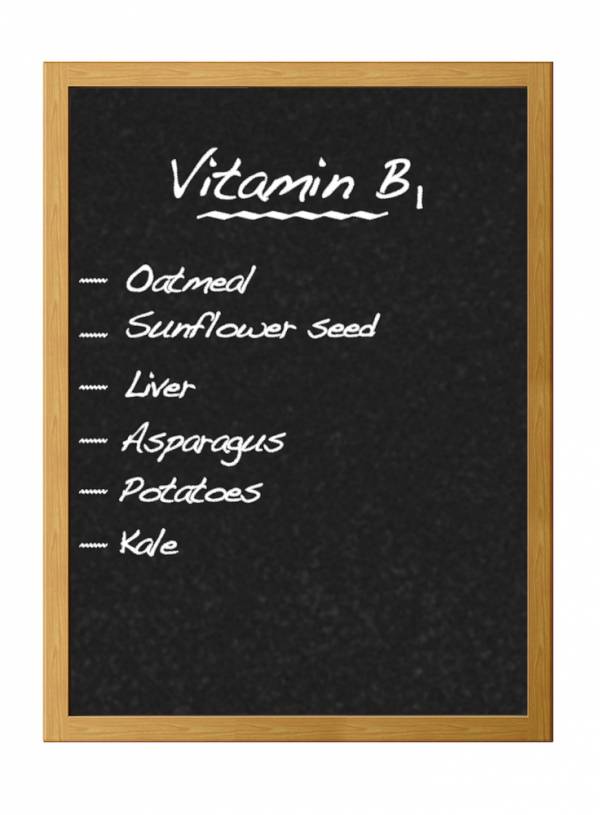 Nutrients that can help with absorption of vitamin B1 are vitamins B2, B3, B5, and B12, as well as copper, choline, manganese, magnesium, molybdenum, phosphate, and zinc.

Beriberi is a condition caused by not getting enough thiamine in your diet. Symptoms include swelling, tingling, burning sensation in the hands and feet, confusion, trouble breathing because of fluid in the lungs, and uncontrolled eye movements. People in the developed world usually don’t get beriberi because foods such as cereals and breads are fortified with vitamin B1.

Wernicke-Korsakoff syndrome is another condition caused by a deficiency in thiamine and is a brain disorder. To be accurate it is actually two disorders. The first is Wernicke’s disease, and is often caused by malnutrition due to alcoholism and involves damage to nerves in the central and peripheral nervous systems. The second phase, known as Korsakoff syndrome, is characterized by memory problems and nerve damage.

Vitamin B1 Side Effects

High doses of thiamine intake do not appear to cause any risk of toxicity. In fact thiamine is often supplemented in high doses to treat maple sugar urine disease. It can also be administered intravenously in the treatment of alcoholism. The broad basis of use has helped in determining the low risk of toxicity associated with increased intake of thiamine.

Scientists are studying vitamin B1 to understand how it affects health. Below are some examples of how thiamine acts in our bodies:

A daily dose of 50-100 mg is often taken as a supplement. Even though thiamine appears safe at these doses, you should talk to your doctor before taking a large amount. Now that you can understand the importance of thiamine, the first step is to make sure you get enough in your diet. Also remember just like the Bananas in Pyjamas, B1 is also accompanied by B2, which we will discuss next week.