Training BJJ without the gi can be pretty disgusting, especially when you’re rolling in a club with no air conditioning in the middle of summer. My club, Titans Fitness Academy, used to be located in a basement in a shady area of Halifax, Nova Scotia. In hot weather, we left the door open and had a couple of floor fans but as we rolled, the mats turned into a big blue Slip’N Slide covered in puddles of sweat.

Good luck passing guard. It felt pretty gross, but it smelled even worse. I’m sure if a normal person found my gear on the floor after class, she would pick it up with a stick and throw it into a dumpster. Eventually Titans moved to a location with air conditioning and no-gi BJJ became a lot less disgusting.

As a result, I decided I wanted to get a rashguard with a cool design like the ones I saw the guys wearing in class. Unfortunately, the only companies with graphics on their rashguards catered exclusively to men, and even the small ones of those were way too big for me. I thought I was doomed to a life full of boring Under Armour, but over the last year, women’s BJJ gear has blown up.

93 Brand Jiu Jitsu will always hold a special place in my heart. They were the first company (that I knew of) to offer the designs I liked in a size XS! My first, and still favorite, rashguard was the 93 Brand x Meerkatsu Mandrill 2.0. The graphics are vibrant and unique thanks to the talented and wonderful Seymour Yang, AKA Meerkatsu, and the structure is flawless. The material is thicker than some other rashguards and exceptionally durable.

GGC is best known for its women’s BJJ camps. My BFF Emily Kwok and fellow Breaking Muscle coach Valerie Worthington have joined forces with World Champion Hannette Staack and Lola Newsom to bring women together to learn from and support each other’s training. I get a ton of compliments on this rashguard and its curved lines are flattering on a variety of figures. The label says Fuji Sports and the quality is excellent. I bought this rashguard and the customer service was above and beyond. They even sent me a little card to say thank you for supporting women’s BJJ.

Not only is The Alloy super sharp looking, its material wicks the moisture away from your skin so efficiently, it seems as though the shirt is sweating rather than you! Phalanx is designing a graphic rashguard for women right now, too. I saw a sneak peek and it’s going to be sick! If it’s made with the same material as The Alloy, I may never take it off. 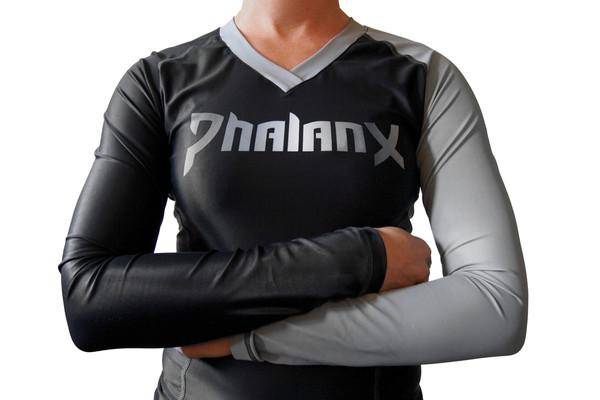 The Qilin featured on this rashguard is apparently a heavenly creature. It is “benevolent and kind, but transforms to a fierce and powerful beast if good is threatened by evil so it is the perfect analogy of a true martial artist and represents the warrior spirit within.” Also, if you think about it, Donkey and Dragon’s babies might have come out looking like a Qilin which makes it twice as cool. The Warrior is a lot longer than most rashguards and less likely to expose your belly. The fit is loose and comfortable, but not too baggy. 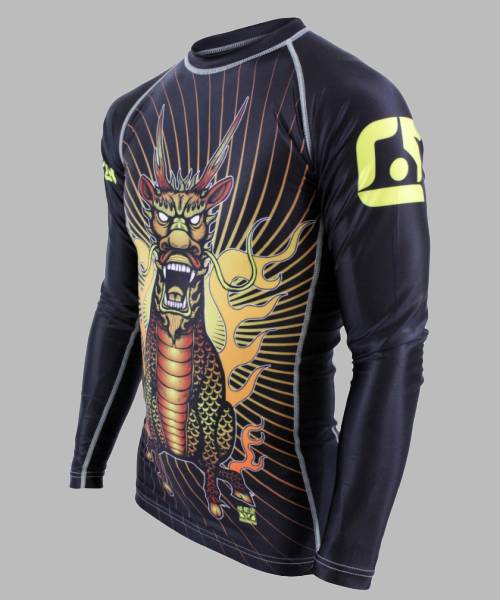 The Gentle Chief is a comfortable compression fit and I love that the design is a darker, hand-drawn look. The fabric has really good wicking properties, too. I wear this rashguard a lot. 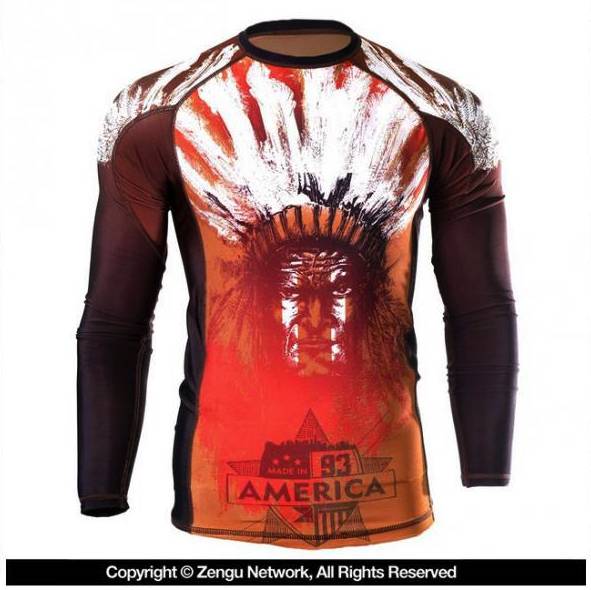 The VA Sport is one of my favorite rashguards because of its simple, eye-catching design. The fabric is really comfortable for grappling and after a year of wear, the screen printed lettering still hasn’t peeled off. It matches everything and it even has a little loop at the hem to tie your drawstring through. 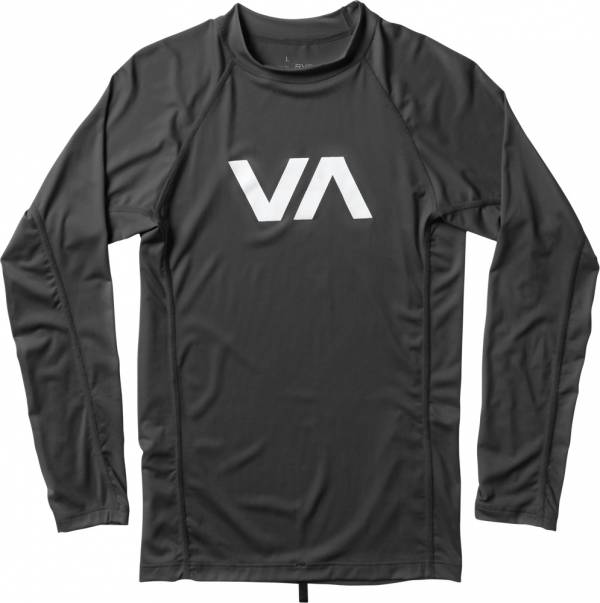 I love graphic rashguards, but I also love graphic spats. I don’t like wearing two flashy things together, though, so I’m glad there are options like the Gameness Top Dog. It was designed for the female grappler and the fabric efficiently wicks sweat away from my skin yet doesn’t seem to retain the fluid. It’s one of my staple rashguards. 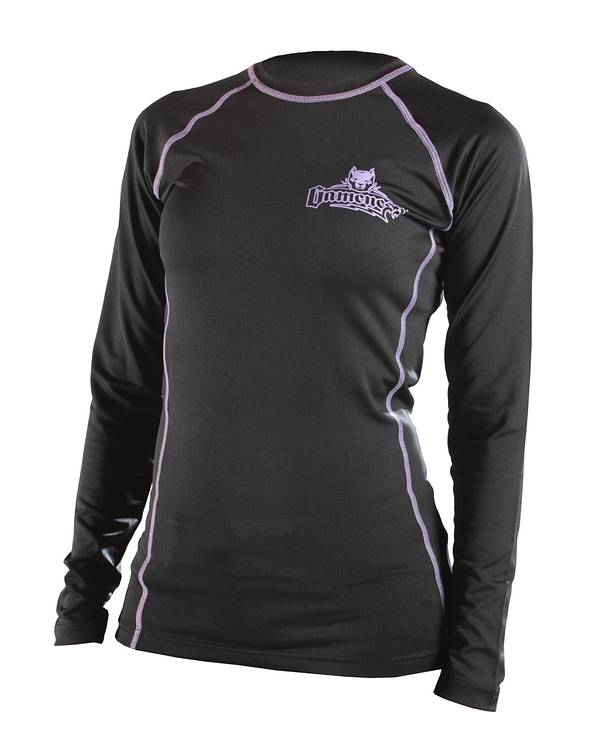 I only wear short-sleeved rashguards under my gi or to Goodlife Fitness for strength and conditioning. My top three picks are the Manto pink women’s “Logo,” 93 Brand “Rosie,” and the Dokebi Brothers ranked rashguard. Honorable mention goes to the Gawakoto Kabuki rashguard. The artwork is beautiful, but I prefer not to wear white rashguards because they become transparent when they get wet.

The Logo rashguard is a simple design and is cut specifically for the female figure. It’s a compression fit and the fabric is thick and durable. I mostly like this rashguard because it’s pretty but it’s comfortable during rolling, running and lifting weights.

Rosie is the first rashguard designed specifically for women by 93 Brand Jiu Jitsu. I was able to test a prototype and it fit perfectly, rolled well and felt comfortable during running and weight lifting. The women in my class are becoming awesome arm draggers and artist Philip Lietz created the perfect Rosie for BJJ. 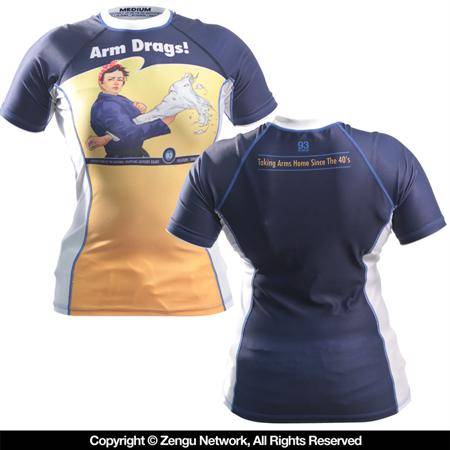 The Dokebi Brothers ranked rashguard is made of two different kinds of mesh. It is feather light and very comfortable while rolling. The sleeves are long enough to eliminate chafing under the arms from the gi. 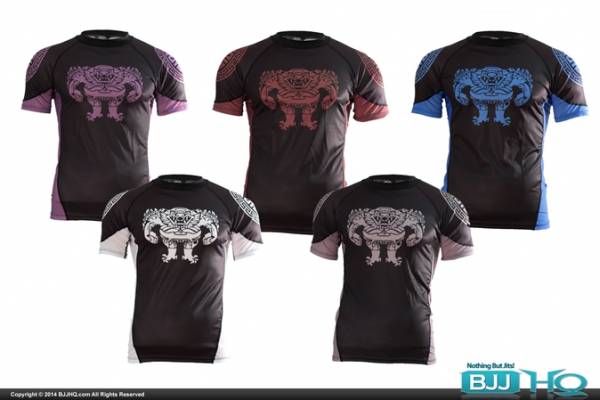 I own about forty rashguards and these are the ones I wear the most. I tried to narrow the list down to five, but I just couldn’t do it! If there is a rashguard you’ve tried and loved, please tell us about it in the comments below.