One movie that stands out in this regard is 1955’s Wee Geordie. I remember seeing this as a young boy when it first came out, but did not see it again until decades later after I had gotten my citizenship in the weight world. At that point I was training with a hammer thrower, so one time we decided to give the move a look and, of course, our expert critique.

A Look at the Life of Geordie

Wee Geordie concerns a puny young boy in the Scottish Highlands who through weight training and hammer throwing becomes a member of the 1956 British Olympic team.

The plot is fairly formulaic and quite predictable, but nonetheless it is an interesting movie. Needless to say it will interest weight trainers, but the Scottish scenery and the clean setting also adds quite a bit.

Bill Travers plays the lead while Alastair Sim plays the laird (landowner) who doubles as a hammer throwing coach. You probably best remember him as the man who played Scrooge in the 1951 version of Dickens’ A Christmas Carol.

Since seeing Wee Geordie, I cannot help but see Scrooge as a hammer coach. Norah Gorsen is the faithful Highland love interest, although her accent was much criticized by reviewers.

In the movie, Geordie eventually accomplishes his dream of going to the 1956 Melbourne Olympics. This comes after years of training under a mail-order muscle peddler by the name of Sampson.

Once the team arrives down under, Geordie is seen strolling in downtown Melbourne where he manages to free an accident victim from a collision with a car, thus becoming a hero before the Olympic Games even start.

And even though he has a love interest at home there is a bit of a harmless dalliance with Helga, a female track athlete, which inevitably gets misunderstood as a romance. Needless to say this does not go over well back in the Highlands.

Eventually things get sorted out and Geordie vows to retire from competition and marry his sweetheart after he wins the gold.

While the plot harkens back to a simpler time, it is important to remember this was one of the first sympathetic depictions of serious weight training on the screen.

The depiction of Mr. Sampson as being a large and rotund man undoubtedly reminded many of Bob Hoffman in later years. I always wondered how many boys were inspired to take up the weights after watching this movie. I don’t think many girls were and that brings up the differences we would see if this movie were ever remade.

A similar movie made today might be called Wee Georgia. A girl discovering herself through strength might sound very well to modern audiences. But regardless of the male or female lead, it would not be called Wee Geordie now since today that name refers to those from the Newcastle area just south of the Border. Too confusing. Try Wee Jock instead.

Quality training would still be part of a modern movie, but Geordie’s sport would probably change. It might be wrestling, boxing, or even weightlifting. But with all due deference to the great spirit of hammer throwing, I doubt that a modern moviemaker would feature that sport. It just would not put many glutes in the seats.

The scene where Geordie saves an injured man today would probably have him stopping an armed robbery, perhaps being injured enough to put his Olympic hopes in jeopardy. But, just like in 1955, Geordie would recover by the final reel and prevail over even a gunshot wound.

A More Complicated Life for Geordie

In one scene in the movie, Geordie insists on wearing his Scottish kilt to the opening ceremonies of the Games. The British Olympic Committee seems to think that England equals Great Britain, so Geordie wonders why he has to compete for England.

He is soon mollified, but for good measure the committee still insists on him sticking to the regulation trousers. But the Highlander prevails, marching into the stadium with his clan kilt, infuriating the brass.

This is one part of the movie that would still not change today. Olympic committees still insist on the uniform and for good reason. But in a modern remake of the movie, the issue of Scottish nationalism would undoubtedly be injected into the plot.

In the real world, Scotland is trying to have their own Olympic committee separate from the rest of Britain, as is Wales. This would add some more drama. Perhaps Geordie would become a tool of the Scottish Nationalists.

Another irresistible plot twist for the screenwriters would be the accusation that Geordie took steroids to get to the top.

This could be played up for all its scandal potential, but he would be cleared by the end of the movie. He might also defeat the steroid users. Professionalism could also be touched upon. Perhaps a modern Geordie would be tempted to do something unethical for the sake of a few more shekels. There’s lots of direction a screenwriter that could take with both of those. 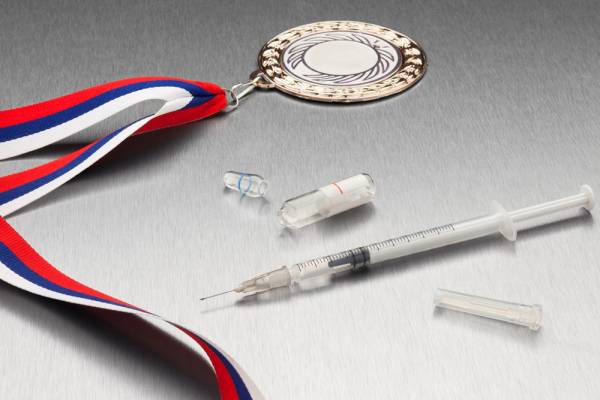 A bit of concentration on the girlfriend back at home would probably still be part of a modern movie, although the cheating would probably would be real now, not just feared. There would be much more drama attached to this part of the plot, with the sweetheart not so ready to take it all lying down.

The potential relationship in the original movie with Helga turned out to be somewhat prophetic in real life.

In the real 1956 Olympics, hammer thrower Harold Connolly of the United States fell in love with Czech discus thrower Olga Fikotova, and they married soon after. Such twists might still be needed to interest non-athletic female viewers.

Finally, we have the issue of him quitting sport after he wins his Olympic gold. This idea undoubtedly played well with female viewers in 1955, but I don’t think it would happen today.

Many athletes have jettisoned relationships in order to participate in their sport, especially in more recent decades.

I can see Geordie and the fiancée of having much more spirited debates about his continuance in sport. Perhaps it would end with a split and inevitably with them coming together again after some crisis, such as him losing at the Worlds. This would work with either a male or a female lead.