Officiating is not an easy job regardless of your sport.

Weightlifting is no exception.

The Difficulties and Disagreements of Refereeing

In the sport of weightlifting, three referees adjudicate each lift. After each lift they display a white light for a good lift and a red light for an incorrect or incomplete lift. Decisions in most lifts are pretty easy to adjudicate, but there are always a few, about ten percent or so, that are not. These borderline calls are where the referee has to decide whether the fault is serious enough to considered an infraction or something that can be let go. There is a wee bit of room for discretion.

Needless to say, not everyone agrees with whatever decision the refs do come up with and often that disagreement is based on a partisan view of the action. This is further complicated by the fact that the referees are human and usually former athletes themselves. Because of that, many referees do have a slight tendency to favor the lifter and perhaps give a white light when a red one was more appropriate.

This will not get the athletes angry, but in a tight competition it can get the other coaches upset thinking that the opponent was given a gift. Others referees are known for their strictness, so they tend to do the opposite. When such decisions go against you or your athletes, you can feel like you’ve been unjustly penalized.

Be Loyal to the Rules, Not Your Team

The IWF Technical and Competition Rules and Regulations rule 7.1 states:

…a technical official acts as an impartial judge of sporting competition. This involves an obligation to perform of accuracy, consistency, objectivity and the highest sense of integrity.

It definitely does not say that officials have to help their teams by any means at their disposal. One of the things I get from this excerpt is that in the execution of their duties, the referees are not to be considered members of their club, area, nation or anything else. They are to be considered representatives of the weightlifting body sanctioning and organizing the event in question.

My job is to interpret and enforce the rules in as unbiased a manner as possible. It is not to work as an adjunct of my team, helping them whenever I can. We have seen this so much in the Olympics where boxing referees and judges will give blatantly biased decisions to the point of a awarding a decision to their own obviously outclassed boxer. These officials certainly help their country but it does give the sport a black eye, which is difficult to recover from.

To illustrate further, in weightlifting it has been the custom in some countries that their officials are expected to give white lights for marginal lifts or those with only a minor infraction. The thinking is that the other two referees will properly give red lights so the lift will be turned down, as it should be. No harm done, but at least the team was supported, right? And if another official gives a white light, then the partisan judge can accept the decision with no guilt. The idea is that that nation’s referees must support their countries lifters at every opportunity.

This policy is wrong on so many levels. As the Romans discovered with their spears so many centuries ago, one can be used against you as well as by you. Roman light artillerymen threw spears at the enemy and were surprised that the enemy took that same spear and threw it back. In our sport, after seeing a blatantly self-serving decision made by Nation A’s referee, it becomes easy for the referees of Nations B and C to be just as biased against nation A in all future lifts. A short-term advantage for country A soon becomes a long-term disadvantage for everyone.

This promotes a disrespect for not only the officials themselves, but for the very rules by which they are governed. Most insidiously, those officials who see their job as one of assisting their team will eventually be seen as dishonest. Their reputations will suffer and soon the requests for their services will dry up. In the long run, they lose.

At some point, you have to defer to human judgment. In our sport of weightlifting, we are not yet at the point where we can use replays to back up a change in referee decision. With that in mind, people have to be patient and empathize with the officials just a little bit. I have found that the quickest cure to this readiness to criticize is to put the critic in one of the chairs at a competition. He or she soon realizes how difficult things are there.

But this criticism can make refereeing a high-level or tight competition even more stressful on the officials. In such cases, how much public criticism of the referees is permissible? 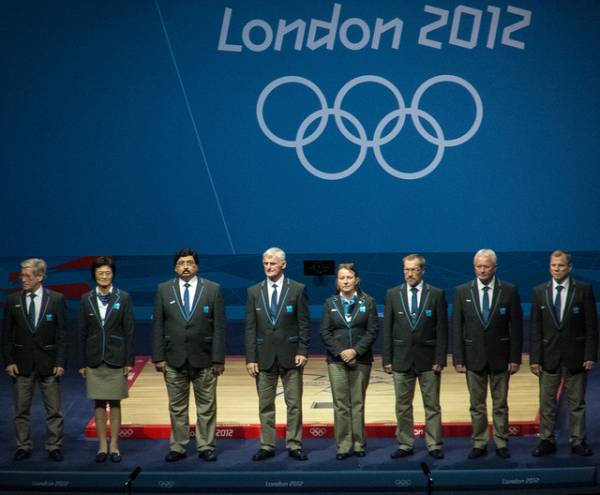 Rule 7.5.9 allows the senior officials to reprimand or sanction any athlete or team official for displaying misconduct within the visible field of play. Physical abuse is definitely not allowed. Verbal abuse is less clear-cut. Baseball allows team managers to ”discuss” various decisions with the umpires. Despite that, I don’t ever recall seeing an umpire change his decision no matter what was said to him by a manager. I believe this behavior is tolerated in baseball to allow individuals to work off a bit of steam. In addition, the fans are long distance away and usually they cannot hear what is being said.

In a weightlifting competition, things are little different. The coaches and athletes are very close on the field of play, and words can be heard easily by all. It then behooves us to maintain a high level of decorum on our field of play. The public berating of athletes or criticism of the officials is unseemly. If this is not nipped in the bud, then it is easy for things to get out of control. All you have to do is look at what some hockey parents will do at their kids’ games. All manner of murder and mayhem is threatened to the point that it is difficult to maintain the ranks of officials from year to year.

Be Respectful of Referees

In the end, athletes have to remember that they cannot always feel their infractions, even though others can see them plainly. Coaches have to also realize that the view the referee has is usually quite a bit different from the view they have. Coaches are behind or to the side of their athlete during a lift, whereas the referees are in front of the lifter. Most infractions are a lot easier to see head-on than they are from behind.

There are proper ways to question an official’s decision. Although there is nothing in the rules requiring referees to explain decisions to anyone but the jury, most referees are willing to discuss matters after the competition. So rather than critique and complain openly, consider discussing with the official afterward. It might be an educational experience for all. And let’s be respectful of each other and our sport.