Why Winning and Losing Matters and the Dodo Is Extinct

Schools insist on equality of result. No one fails and no one’s self-esteem is damaged – and no one is prepared for real life.

The Dodo suddenly called out “The race is over!” and they all crowded round it, panting, and asking, “But who has won?”

This question the Dodo could not answer without a great deal of thought, and it sat for a long time with one finger pressed upon its forehead, while the rest waited in silence. At last the Dodo said, “Everybody has won, and all must have prizes.

We can all laugh at the pompous and ridiculous reasoning of the dodo bird, but many school systems today seem to have raised the dodo’s thinking to the level of dogma. Where the schools once championed equality of opportunity, they now insist on equality of result. No one fails and no one’s self-esteem is damaged – and no one is prepared for real life.

The Fallacy of No Winners in Real Life

I once refereed a weightlifting competition for kids ranging in age from about twelve to nineteen. After a medal ceremony the mother of one of the athletes came up to me and gave her opinion that it was too bad all of the kids couldn’t get medals. Immediately seeing a dodo bird in front of me, I decided to throw this remark back at her. I asked her if she gave her kids a weekly allowance.

“If they don’t do their chores for the week, do they still get their allowance?” I asked.

She replied that the kids would never learn how to do anything properly around the house or farm if they got rewarded for a bad job. I agreed with her, of course, and then subtly pointed out the inconsistency in her logic. I guess I wasn’t subtle enough for she turned on her heel and walked away.

The Merit of Meritocratic Nobility

The biggest problem with everyone receiving prizes is that the prizes become worthless baubles. This reminds us of the old saying from who knows where: “If all men are nobles, then no man is a noble.” Self esteem comes from knowing you do things better than others, not from accomplishing the same nothing as others.

Hereditary nobility might rub egalitarians the wrong way, but the fact is that we do have meritocratic nobility. And thank God for that. If I ever end up in an operating room, I hope the surgeon is way better than anyone else at his job. I sure wouldn’t someone operating on me who was only given an MD in order to preserve his self-esteem. We need this meritocratic nobility in order to have something to look up to, to aspire to, and to depend on when needed. Conversely, even if there was no such elite, others would still tried to distinguish themselves by being better than the average.

In this way, the coach hoped he would give his players some of the joys of winning, the joys of tight competition, and an opportunity to learn from a superior team. He thought this mixture of levels provided his team members with the best training for their futures lives, if not for serious football. They would learn how to be gracious in victory, to recognize the joys and pains of heavy competition, and to humbly learn from their mistakes and the superior talents of others.

Sports as Apprenticeship for Life

When I was just learning how to play sports, I was lousy, as was everyone else my age. We would play sandlot baseball, football, soccer, and hockey (icelot?) with the neighborhood boys of varying ages, anywhere from nine to thirteen or so. The first year I was barely tolerated and always picked last when captains divided up the teams. In my second year I improved a little bit but not much, maybe picked third or fourth last in the pecking order as older boys would move on to pursue other things.

Eventually however, towards the end of our time on the neighborhood fields many of us ended up as captains ourselves. With the wisdom of age I can now see what we were really doing was working an apprenticeship, not only in sports, but also in the wider world of general teamwork. In a few years we would all be going off to work and we would be the “freshman on the playing field” once again. We had another apprenticeship to go through and that one would be done in a more serious game. But at least we were prepared for what might lie ahead by our years of competition on the playground. We learned that success was not going to be handed to us. 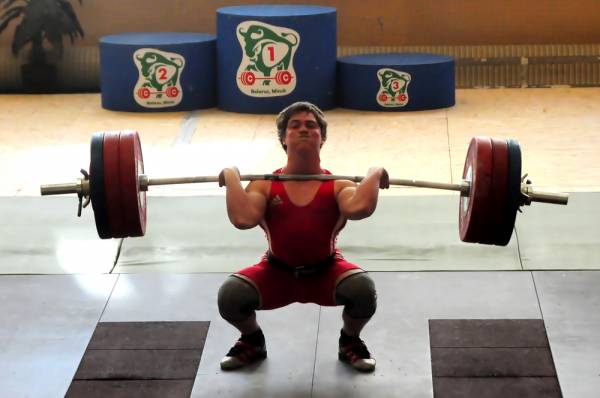 The Meritocracy of Weightlifting

Lifting is a pure meritocracy and it is objective – all numbers that cannot be argued with. Nobody is judged on how cute his or her outfit is or how well the referee knows your style, but only by how much was on the bar. If you train properly, then you will rise up the hierarchy. Most importantly, you see that reward only follows effort and nothing else.

Whoever lifts the most will win, but it is important to remember in weightlifting that those who finish down the standings do not necessarily lose. You do not always compare yourself to the winner. Like a golfer, you may compare yourself to your own previous best or a performance that you hope to achieve (your “par” so to speak). In this way someone who totals 220kg when his previous best was 200 will feel more like a winner than the person who totals 300 and wins the event even though his previous best was 330kg. There’s more than one way to win. Weightlifting competition need not be a zero-sum game.

In conclusion, competition has its good and bad points, but I feel we must not throw out the baby with the bathwater. The idea that all must have prizes has caused enough trouble over the last several decades. It’s time we take a step or two backwards to teach people that anything worth striving for will require hard work and it will involve competition with others.

Some school boards may have done away with winners and losers, but life has not. This artificial scenario doesn’t bear the slightest resemblance to anything in life. We should be teaching two rules:

There are no dodo birds out there. They really are extinct.