If you’ve ever had a major abdominal surgery you know how important your core muscles are for everyday functioning. Before my first c-section, I took these muscles for granted.

But now, after recovering from two c-sections and diastasis recti, I’ve come to realize the importance of safe, effective core strengthening for everyone, from hardcore athletes to deconditioned clients.

Although the abdominal muscles are one important muscle group, the core musculature extends far beyond the abs. Coach Jeff Kuhland explained what the core is and how it functions in his article Do You Know What Your Core Really Is and What It Does?

Your core most often acts as a stabilizer and force transfer center rather than a prime mover. Yet consistently people focus on training their core as a prime mover and in isolation. This would be doing crunches or back extensions versus functional movements like deadlifts, overhead squats, and pushups, among many other functional closed chain exercises. By training that way, not only are you missing out on a major function of the core, but also better strength gains, more efficient movement, and longevity of health.

So if the 1,000 crunches-a-day challenges aren’t going to help, what is? In his article, At the Core of It: Creating Strength and Tension in the Body, coach Andrew Read recommended four exercises to build core strength:

Here are some videos and articles from our archives to get you started with these four out-of-the-box core exercises:

You’re probably familiar with the most common isometric core exercise: the plank. If you were to boil many gym exercises down into one lowest common denominator, it would be the plank. But if you’re able to hold a plank for a long time and it’s just boring at this point, here are some dynamic plank exercises from parkour expert Ben Musholt to mix it up a bit:

READ: Everything Is a Plank (If You’re Doing It Right, That Is)

If you’ve ever tried crawling for a considerable distance, you know how much it can work your core. It’s surprisingly brutal. In the video below, Al Kavadlo demonstrates three different crawling variations to add to your routine:

The front lever is a cool party trick and an amazing core exercise. If you’re protesting that you’re too tall to do a front lever, check out gymnastics and physical culture expert Logan Christopher‘s article,How to Build Up to the Front Lever. Logan is 6’2″ and 185lb – not exactly the typical gymnast body type. Here are the six progressions he recommends for mastering the front lever:

In the article cited above Andrew Read suggested combining levers with single-sided exercises. And if you’re looking for tips in that department, look no further than strength and conditioning coach Ian King‘s comprehensive series on unilateral training:

Featured coach and MovNat Master Instructor Vic Verdier explained the important role of throwing in increasing stability and explosive power in his article, The Big Bang: Explosiveness Is at the Root of It All. He also explained the link between throwing and one of my favorite core exercises, the kettlebell swing:

You can use a slam ball, a medicine ball, a stone, a small log, or even a kettlebell if you feel like a daredevil. Ideally, you have a partner who will catch and throw the object back at you, but you can also do this by yourself and just throw the object as far as you can each time.

The throws will be at chest level, using your legs as the main source of power, your arms being mainly used to direct the object. The progression will also feature the swing throw (and catch) where the object is swung between your legs, relying more on the power generated by your hips (think kettlebell swing). 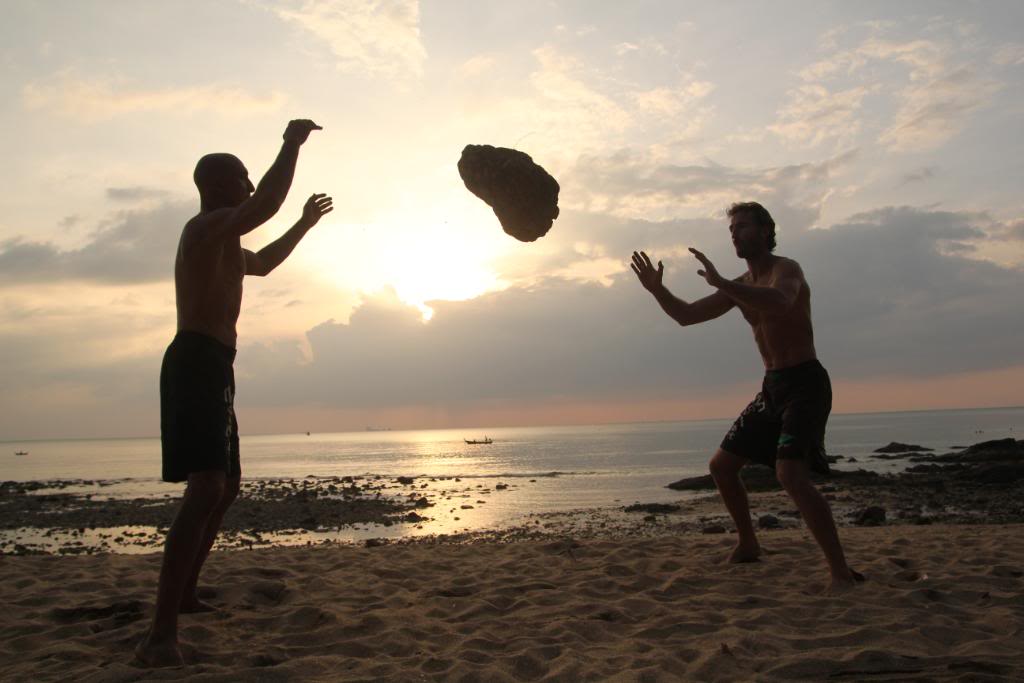 The exercises listed above might be too advanced for some people. If you’re just starting to rebuild core strength, Coach Jeff Kuhland outlined a stability program using the following screens to gauge where your core strength and stability need work:

Working on core stability and strength might not produce the same kind of measurable gains as doing a deadlift cycle or similar program, but I guarantee you will notice how increased core strength carries over to other areas of training, not to mention everyday life. Give these exercises a shot and let us know how it goes!