The cessation of strength training can result in losing the hard-fought gains in strength and power obtained during the offseason.

Hardcore strength and conditioning professionals hate the term maintenance applied to resistance training efforts of athletes in-season. After all, the goal is to always improve, not stay the same.

Often this concept, to maintain, is applied simply to remind athletes that without a reasonable form of resistance training their improved strength and power measures are likely to return to baseline values. Certainly the mere act of maintaining strength and power traits is more attractive than losing these same characteristics. It is clear that cessation of strength training, sometimes for as little as a couple of weeks, has a deleterious effect on keeping the hard-fought gains in strength and power obtained during the offseason.

Coaches of pure strength and power sports like football, certain events in athletics, volleyball, and many others recognize this need to lift year round. Their athletes include some sort of lifting during the competitive season. But this concept is often a hard sell for the endurance athlete. Except for track cyclists specializing in short-duration explosive events, the average cyclist all too often considers weight training something to only engage in during the winter months, when riding is at a minimum.

In-season maintenance training need not be extensive or exhaustive. Most cyclists simply do not have the time or the energy to keep up full time resistance training, so it would be foolish to attempt to maintain comprehensive strength training while traveling and racing nearly fulltime. However, an abbreviated program, perhaps once or twice a week for a short period of time, can easily maintain, or slow the loss of, strength and power.

Hitting the weights only once a week may cause enough delayed onset of muscular soreness (DOMS) post-workout to interfere with smooth pedal stroke in the hours or days following the lifting session. Training twice weekly should greatly reduce the likelihood of DOMS. However, once a week is certainly more positive than no training at all.

In addition to reducing the frequency of lifting it makes sense to reduce the volume (total number of repetitions performed). One to three sets of selected exercises, rather than the usual three to five, assist with maintaining strength and power gains from the offseason.

Most studies of detraining conclude that while volume and frequency can be safely reduced in-season, intensity of effort must be maintained. This means getting to the serious lifting sets quickly, reducing somewhat the volume of work done with moderate loads. Of course, a rider may find his or her high-intensity efforts are naturally reduced somewhat due to the effects of an active racing season, but the perceived effort put forth in lifting can remain high, regardless of actual personal records. 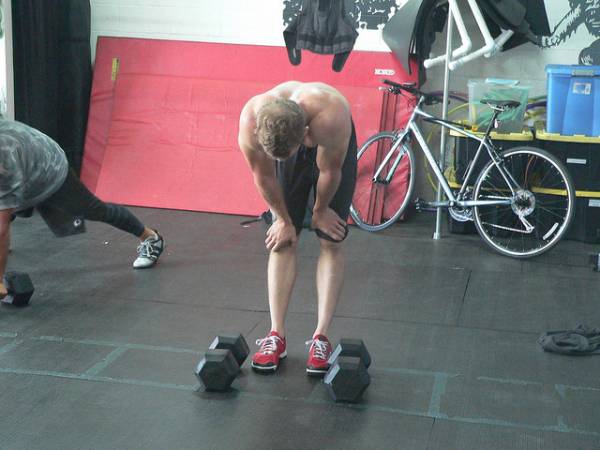 It remains vital to train all parts of the body, conveniently subdivided earlier in this series into upper body pushing, upper body pulling, abdominal, lower back, and lower body.

In-season is a great time to utilize time saving combination exercises, such as a power clean + front squat + push press. Let’s say the rider does three sets of three repetitions in this combination (a nine-rep set with any order of repetitions permitted). The limiting factor is the amount of weight handled in the push press, so the power clean and the front squat may not have sufficient intensity to maintain the total body effects normally required of these two moves.

It is also possible in this scenario that the lifter first performs one power clean, followed by three push presses, followed by two more power cleans, and the series finishes with the three front squats. In this case the lifter can make the front squats more challenging (increasing intensity) by lowering and rising to a count of five seconds in each direction. At the end of a set or two of this combination the rider might finish off with a heavier set of front squats and/or power clean, two higher priority movements for a cyclist than upper body pushing (push press).

Many times riders can maintain strength gains with bodyweight resistance, particularly in exercises that provide a high-intensity effort, such as pull ups, parallel bar dips, dynamic step ups, or similar moves. If the rider cannot perform pull ups, inclined pull ups are often workable by rigging up a bar across two solid objects. If he or she cannot execute full range of motion parallel bar dips, then a simple clapping (plyometric) push up done in low repetitions may suffice. Step ups or lunges, with or without external load, maintain lower body strength.

Of course, it is vital to maintain some form of lower body plyometric training, as previously covered, in-season. This does not need to be extensive, but the efforts must be challenging in order to transfer weightroom power to the pedals. 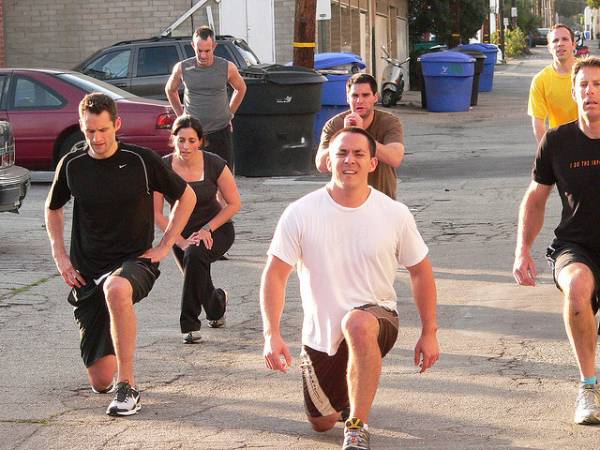 Maintenance lifting remains in effect throughout the racing and riding season. As part of a normal taper be sure to back off the lifting a couple of days prior to a big race or century ride. But get back in the gym at the first opportunity and hit an abbreviated program as described above.

This series has covered the entire year of a periodized resistance training program for cyclists. Again, it is vital that masters (those over 35 or so) and females continue lifting throughout the year. Both of these groups start with a bit of a deficit, hypertrophy-wise.

In-season the biggest priority remains racing and training on two wheels. Big gains on the bike are available to those that make the effort to include a sound resistance-training program in their overall performance package.