Presuming readers have followed the advice offered in previous installments of my cycling program, it’s now time get serious about developing strength. True, after a few months of preparation work a cyclist may have increased the amount of weight used in a particular exercise, but that does not actually mean the rider has gained absolute strength.

Most studies confirm that in early stages of resistance training much of the improvement (utilizing increased weight in the same exercise) comes from what’s known as neural adaptation. Increased voluntary muscle activation, not increased muscle size, contributes significantly to progress made. This tends to be especially true with beginners or individuals who do not resistance train on a regular basis. Your maximum strength does not actually increase significantly during the first weeks or months of lifting, although progressively heavier weights may be used.

Moving Into the Strength Phase

For the past three months we’ve progressively prepared the muscles for the more intense work to be done this month. The strength phase emphasizes the heaviest loads, which, of course, results in fewer repetitions performed. In a typical model for periodized training, as your volume (quantity, measured by total reps performed) decreases, the intensity (quality, measured by average weight on the bar) increases. This trend moves us toward peak performance.

Theoretically, strength results are optimized with repetitions between one and six. Hypertrophy (muscular growth) is generally facilitated with reps between eight and twelve. Repetition schemes beyond fifteen tend to address muscular endurance. While cycling is all about muscular endurance, this trait is most appropriately achieved on the bike or during other off-bike, cross-training pursuits. Training muscular endurance in the weightroom does not produce significant gains in actual strength, yet that’s one of our main goals.

So, let’s aim at getting stronger.

As the new year starts, most cyclists are eager to just get back to more riding. Depending on a rider’s specific cycling discipline, the shift from off-season to pre-season generally means less time in the weightroom. Roadies, especially those not snowbound in northern climes, may be able to adequately focus on strength development with only two days in the gym. Track riders, especially those focused on power events, are better suited to maintain three days per week on the weights.

As mentioned before, in order to retain gains achieved in the off-season, women and masters must continue to resistance train throughout the year. For nearly all cyclists, this time of year is too early to cut back on the weight training efforts. 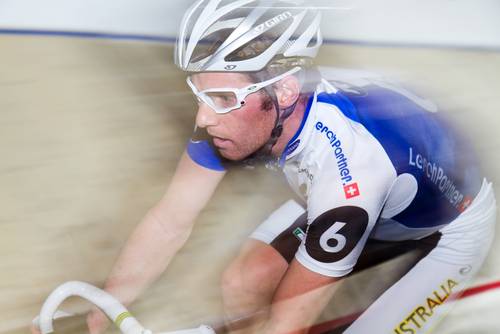 Regardless of a rider’s cycling discipline, the strength phase means heavier loads used in multiple-joint, total body exercises. Fewer exercises may be utilized. Numerous studies have shown that sufficient loading in exercises like the squat and the conventional deadlift creates outstanding core muscular engagement. Thus, you can forget about doing isolation movements for the core, such as crunches or back extensions.

Since higher intensity loads are used, more sets are normally involved. Previously we focused on a warm-up set, followed by three sets of moderate (eight to twelve) reps. In the strength phase it’s still a good idea to start with a light set of ten reps. The next set requires a heavier load for perhaps eight reps, followed by another increase in weight and reduction to six reps. Here we may remain for two or three sets, same weight. Alternatively, you may further increase weight, keeping the reps around six, but no lower than four.

NOTE: I strongly suggest that cyclists, at least those not familiar with maximum strength efforts, avoid sets with fewer than four repetitions. It’s not necessary in order to improve strength and it may prove far too dangerous for someone not accustomed to the inter- and intramuscular coordination necessary to successfully lift high-intensity loads.

Perfect exercise technique remains a must, especially as loads increase. In the serious strength-building sets the final repetition should be challenging. This is not because the muscles are exhausted from high repetitions, but because near maximum effort is necessary. It’s even okay if the final rep results in a failure. That’s the level of intensity needed in order to optimize strength development.

Failure with a rep, while not a planned occurrence, must be anticipated. In certain exercises, especially squats and movements like bench press, one or more trained and effective spotters are a must. This is a cardinal rule.

I do not recommend heavy bench pressing. This is not only due to the possible danger (bench press deaths and injuries, usually unsupervised, are well documented), but this is not a priority exercise for a cyclist. Incline bench presses, perhaps with dumbbells rather than a barbell, or overhead pressing, or parallel bar dips all accomplish the same goal of improved upper body pushing strength without the risks of the flat bench press.

The rest time between sets, addressed previously, remains a challenge for cyclists. Due to the increased intensity here rest intervals of three or four minutes may be needed. Without sufficient rest the athlete simply cannot perform at a high enough level of intensity to sharply increase strength.

Aim for full recovery (24 hours) between heavy training sessions and serious efforts on the bike. With a two- or three-day-a-week lifting schedule, choose a day every week or two for a heavy effort that breaks an existing repetition record in a primary lift. The other day(s) are more moderate efforts. 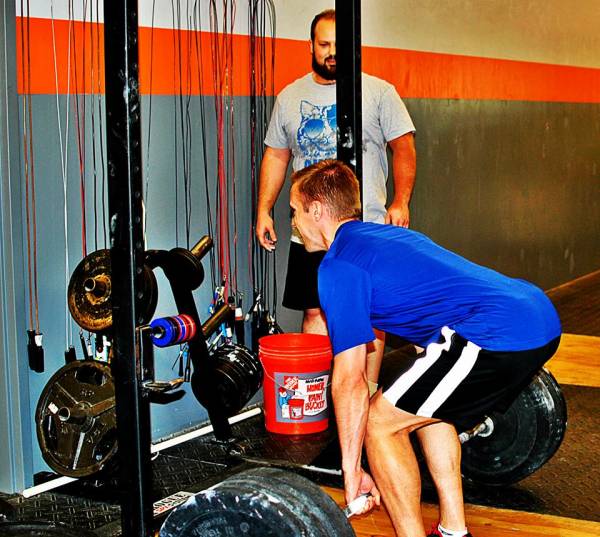 Keep a balanced training program throughout the strength-building phase. Squats and deadlifts are certainly highly recommended moves, but as always, these need to be done carefully. If you are unfamiliar with the specifics of exercise technique, seek out the assistance of a strength training professional, hopefully one experienced at applying strength training methods to athletes from a variety of sports.

For those not comfortable or capable of squatting, the leg press can be used for the lower body, but don’t get carried away with too much weight here, as distorting the body’s position or using the hands to assist the legs is simply wrong (and evidence of too much weight).

In order for deadlifts to be safe and effective you must aim for perfect form and execution. This means a flat back and neutral spine, using a conventional foot stance and grip. Don’t start in on sumo-style deadlifts or confuse the prescribed move with the stiff-leg deadlift (SLDL).

Some form of upper body pushing and pulling exercises must remain, but there is a large variety from which to choose. Keep the plan simple, keep it safe, and keep it effective.

Hopefully readers heeded last month’s advice to include some lower body plyometric work. This power-oriented training continues this month and will soon become our most important ingredient.

Jumps can be part of the pre- or post-workout plan. Repetitions do not need to be excessive, but an emphasis on speed of movement and maximum or near maximum efforts is vital. No longer are we talking about low intensity efforts such as jumping rope or simple jumps in place. Seek out training environments that feature safe, secure, professionally designed jumping boxes.

Now, let’s get at least one month of serious strength training under the belt!

Next month we build more strength, with an eye on power development.

Harvey Newton, the 1984 USA Olympic coach for weightlifting, was an active road and track cyclist for over twenty years in Florida and Colorado. From 1982 through1992, he served as the strength and conditioning advisor to USA Cycling, which included hands-on coaching for many of the national track team members.

Newton is the former executive director of the National Strength and Conditioning Association, and maintains a CSCS credential. He served as the editor-in-chief of the NSCA’s Strength & Conditioning Journal from 1993 to 1997.

A noted national and international clinician, Harvey Newton authored Explosive Lifting for Sports and has developed numerous educational products including the popular Strength Training for Cyclists System available on his website Newton Sports.