Did you ever take a moment to consider the feats performed decades ago by the old-time strongmen? Arthur Saxon would put 300lbs over his head with one hand as a part of his show, nightly, sometimes for multiple shows in a single day. If you were like Saxon and your job was lifting heavy things night after night as a performer, how would you approach it?

Would you apply modern, high intensity training “wisdom”? Would you push yourself to fatigue and near exhaustion? Maybe let your technique get a little sloppy? Oh, and make sure you were very tired, laying on the floor sucking wind like a fat kid chasing an ice-cream truck when you finished, and so sore you walk funny for the next few days?

If you took this approach, then you would also most likely wind up some combination of weak, injured, and unemployed. Sure, you could keep at it for a little while, but the “no pain, no gain” mentality would eventually catch up with you.

I much prefer the concept of “no pain, know gain.”

The No Pain, Know Gain Approach

What if, instead of all that silliness, you approached training like it was your job? What if you got paid to not only make the lifts, but to look good and be entertaining while you are doing it?

Keep it in perspective that missed training (performing) time from an injury would be time that you couldn’t do your job and that there are always wolves at the door in the form of up-and-coming, would-be strongmen who want to challenge you for the position of being the star of the show. If you don’t lift – for whatever reason – then you are unemployed. 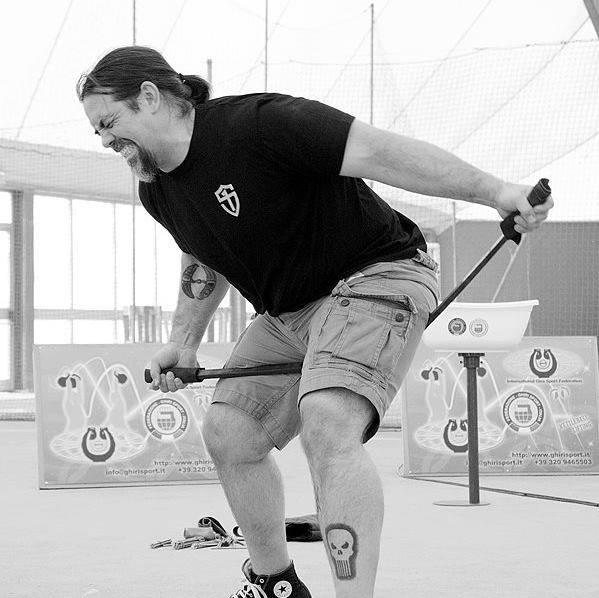 The commonality of the training of the old-timers as well as the modern performing strongmen is constant practice and progressive overload. Not constant extreme effort, constant straining, constant “feeling the burn,” or constant pushing yourself to exhaustion. I am not just recounting history here.

Modern Grandmaster Strongman Dennis Rogers told me the exact same thing. If you don’t know who Dennis is, search YouTube and prepare to have your mind blown. In his mid-fifties, Dennis is about 5’9” and 170lbs – and bends wrenches, frying pans, screwdrivers, and all manner of other things. The Association of Oldetime Barbell and Strongmen proclaimed him “Pound for pound the world strongest man for the feats he performs.” He is my mentor in the art of the old-time strongman.

There have been times I have spoken with Dennis about a particularly tough feat he wanted to test out and heard him say words to the effect of, “I think I can do that, but I have nine shows in the next two weeks and I don’t want to risk hurting myself. After that I have a couple weeks off. I will try it then.” This is the essence of a professional attitude.

Dennis’ mentor, old-time strongman legend Slim the Hammer Man told me that if you attempt a maximal lift in front of a crowd for a show, then you are an amateur (unless of course it is for a documented record). His reasoning is simple. You can only run wide open all the time for so long, and then something will break. The thing that breaks almost certainly won’t be any kind of a lifting record. “People didn’t pay to see me try to make a lift. They paid to see me make a lift, and look good doing it,” he said.

See the theme here? The greatest strongmen in modern history, absolute legends of strength, all have a similar attitude and approach in training. 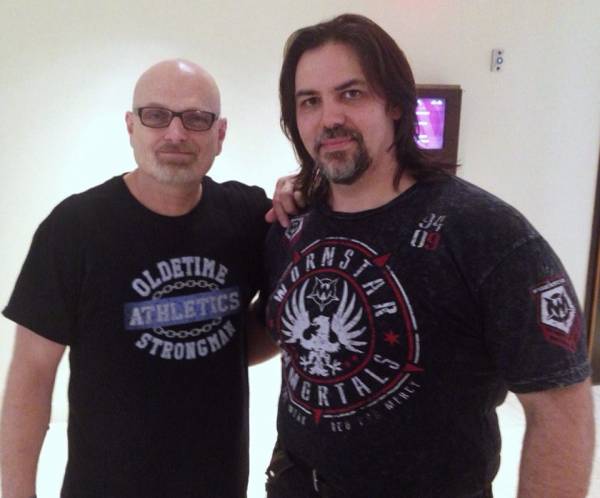 Dennis Rogers and Me

If you want to test yourself and see what you can do in an all-out attempt, I am certainly not opposed to it. I am a fan of occasionally flipping the crazy switch and seeing exactly where I stand in a given lift or feat of strength – but it should be a very infrequent and planned thing.

The majority of your training will likely be in the 70-85% range. If you constantly test the limit, you will find it. If you constantly work within your limits and focus on making your practice better and better, then your limits will move without having to push them. This can be a difficult thing to stick with. We hit a new all-time personal record, then we immediately want to see if we can do just a little more.

I recommend focusing on doing just a little better instead of a little more. Remember: your goal is to get stronger, not make yourself tired or sore. With this in mind I have put together a four-week program for you. It keeps with the idea of practice and making incremental progress. Treat it like a performance. Give this program a try and let me know how it goes.

Committed to spreading a message of strength and redefining impossible, Iron Tamer Dave Whitley is StrongFirst Master instructor and performing strongman based in Nashville, Tennessee.

Dave teaches and performs all over the world and was featured in the German documentary Kraftakt. For more information about performances or workshops, visit his website, Iron Tamer, or email him.