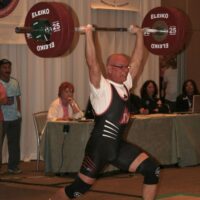 Terry Hadlow started lifting in 1970 at the age of thirteen. He was a member of the CanadianJuniorNational team at seventeen, Senior B team at eighteen, and on the SeniorA team at nineteen. He was selected to three junior world teams and competed in two of them. His best finish was a tie for third place, but he lost on body weight. His best lifts as a junior were 140-167.5 in the 82.5 class. Terry won medals in the 1978 Commonwealth Games and 1979 Pan Am Games, and was selected to the 1980 and 1984 Canadian Olympic Games team. He competed in five senior world championships, with a best finish of twelfth in Moscow in 1983, with 90kg lifts of 155-185. Terry’s best lifts ever in competition were 160-190 and his best training lifts were 163-195 at 90kg.

After that, Terry took a break from world competition and trained to compete in competitions in North America.His last competition was the 2013 Pan Ams inChicago, Illinois. He won with lifts of 108 (world record)- 132, for a total of 240 (also a world record).

Terry always takes the summer off training, as his summer work schedule just doesn't allow time to workout. In addition, there’s no training in September as that’s Terry’s time to go R.V.-ing.