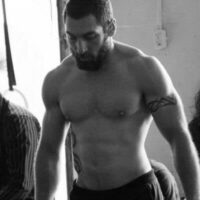 Travis Holley grew up in the wonderful and exciting town ofEvanston, Wyoming (look it up).It was a great town to grow up in, but with not a whole lot to do he spent most of his time outside causing trouble in the neighborhood or playing sports. This is where he developed his passion for fitness and an active lifestyle. This love for health and fitness drove Travis to pursue his BS degree in Sport and Exercise Science from the University of Northern Colorado.This is also where his mentor first introduced Travis to CrossFit. "Cindy" was his first WOD, and ever since then he's been hooked!

Early on in his CrossFit career, Travis was involved in the start-up of two separate CrossFit affiliates in Colorado, and while doing so developed enough skill as a CrossFitter to compete in the 2008 Regionals, placing 10th overall. He would have a new home and training ground, however, by the summer of 2009.Travis jumped at a life-changing job offer at CrossFit Central in Austin, Texas.Since joining Central, Travis has earned a head coaching role as well as created his own brand and program, Strictly Strength.Among other elite-level specialty groups, this program is now one of the select training methods used by the CrossFit Central competitors as they prepare for the 2012 Games.

As the CrossFit Central team prepares for the 2012 Games, Travis hopes his five years of CrossFitting, and previous Games' experience will help solidify a first place spot for the strong and extremely well-rounded affiliate team.